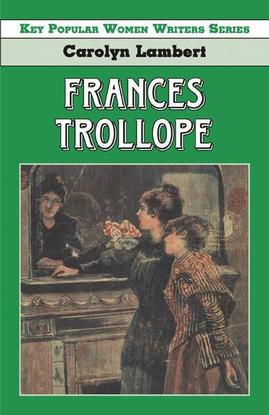 By the standards of any age, Frances (Fanny) Trollope was an extraordinary woman who led an extraordinary life. She did not begin writing until she was 53, but in the 24 years between 1832 and 1856 she produced no fewer than 40 books, comprising 150 volumes. Her impulse was to save her family from financial ruin

The Mother of the novelist Anthony Trollope, she was born at Stapleton near Bristol on 10 March 1779. She lived through tumultuous events: the madness of George III, the Napoleonic wars, the French Revolution and the threat of civil war in Italy.  The political, economic and social upheavals of the age were mirrored by Trollope’s own restless travels through Europe and America, driven by the need to support her family and by her own thirst for company and social and intellectual stimulation.

She drew unashamedly on her own experiences, the people she met on her travels and her large circle of friends and acquaintances to produce her copious range of novels and travel books.  She was prolific, critically well-received and very popular.  It is puzzling to know why she has apparently been marginalised and largely over-looked, particularly given the radical and  controversial nature of much of her writing, combined with her unerring eye for the pretentious, exuberant comic sense, and sardonic wit.  This book exposes the reasons for Trollope’s unjustified neglect and seeks to give her the recognition she deserves.

Carolyn Lambert is a visiting lecturer at the University of Brighton where she teaches nineteenth-century literature.  She is the author of The Meanings of Home in Elizabeth Gaskell’s Fiction (2013) and co-editor with Marion Shaw of For Better, For Worse: Marriage in Victorian Novels by Women (2017).  She has a chapter entitled ‘Female Voices in Elizabeth Gaskell’s Mary Barton’ in a forthcoming publication from Bloomsbury edited by Adrienne E Gavin and Carolyn W de la Oulton.