Irish Women Writers at the Turn of the Twentieth Century 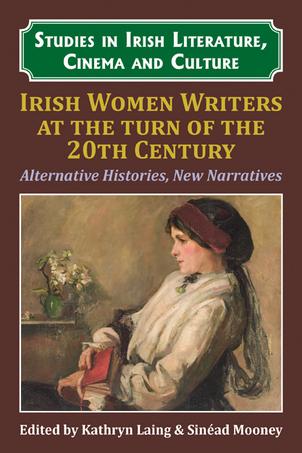 This major new work on significant but neglected or marginalised late nineteenth-century and early twentieth-century Irish women writers could not be more timely.

This collection presents international research on the work of Irish women writers at the turn of the twentieth century. Discovering new voices and introducing original perspectives on the lives, works and networks of more familiar literary figures, these essays make a key contribution to contemporary feminist recovery projects and remapping the landscape of Irish literature of this period.

There is a burgeoning interdisciplinary and international field in which a diverse range of hitherto neglected Irish women writers have been recovered, and their lives, works, networks and other contexts illuminated.  Irish Women Writers at the Turn of the Twentieth Century capitalises on this rich, diverse and innovative field, drawing on new scholarship that develops existing strands of enquiry further. It also opens up new avenues for exploration.

The strengths of the work is in its seeking of new engagements specifically in relation to Irish women’s cultural economies, particularly literary networks, access to literary production and publication, the long nineteenth century and emergent modernist aesthetics. A further key concern is the politics of retrieval of lost women’s lives and writings, the relationship of Irish feminist critical projects to the ongoing acts of commemoration associated with the formation of the Irish state, and increasing concerns with the future-proofing of ‘lost’ feminist digital recovery projects of the 1990s.

This new collection of original work offers new scholarship about these concerns in late nineteenth-century and early twentieth-century Irish women’s writing. It draws attention to the significant figure of the Irish New Woman, feminism in the archives, vegetarianism and suffrage, anthologies and the canon, literary and publishing networks, digital methodologies, and women’s writing and intellectual journals, newspaper and periodical histories.

Waking The Feminists, a movement campaigning for better female representation in the arts was established in Ireland in 2015. The launch of ‘Fired!’, a ‘convergence of practising women poets and academics responding to the publication of The Cambridge Companion to Irish Poets (2017) protested against the exclusion of Irish women poets generally from the literary canon, including many who were popular and prolific during the nineteenth century.

Dr. Sinéad Mooney is a senior lecturer in English at De Montfort University, Leicester. Her research interests are in modernism, women’s writing, and Irish literature, and she also teaches creative writing. She has published widely on the work of Samuel Beckett and Irish women’s writing, especially the work of Elizabeth Bowen, Edna O’Brien, Molly Keane, and Mary Lavin. Her monograph A Tongue Not Mine: Samuel Beckett and Translation (Oxford University Press, 2011) won the ACIS Robert Prize for Irish Writing. She is currently working on Katherine Cecil Thurston, and on turn-of-the-twentieth-century speculative fiction by Irish women.


Find out more about this series - read here...