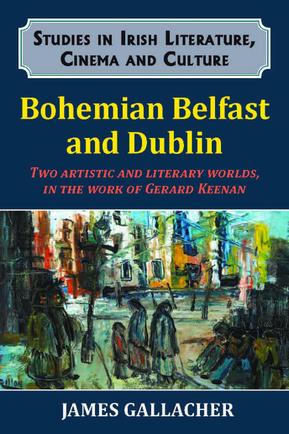 Two artistic and literary worlds, in the work of Gerard Keenan

This significant new work redraws the lines of understanding around the literary networks of mid-to-late 20th Century Ireland, particularly between Dublin and Belfast.

Such a direct and personal connection between the literary bohemia of Patrick Kavanagh and Flann O’Brien, and the world of the Honest Ulsterman at the start of The Troubles has never previously been made.

This book brings to light, for the first time, the creative writing of Gerard Keenan – better known by his pseudonym ‘Jude the Obscure’, under which he wrote a regular column for the influential Northern Irish periodical The Honest Ulsterman for over three decades.  He was also a contributor to Lagan and Envoy, and to Kavanagh’s Weekly.

The fictionalised biographical nature of Keenan’s stories, written over the course of 40 years provides a unique depiction of Belfast as an artistic, literary and bohemian centre – a representation largely missing from popular and academic consciousness.

Dr. Gallacher provides a major introduction as well as the texts of a series of Keenan’s unpublished biographical short stories. These are drawn from a significant cache of his private papers to which he holds exclusive access. They range in subject matter from accounts of his association with Dublin’s literary bohemia, particularly his tempestuous friendship with Flann O’Brien and Patrick Kavanagh and his time as a contributor to Kavanagh’s Weekly, to his role in the founding of the Belfast Arts Theatre.

This material is supplemented by a small but significant selection of long forgotten work published by Keenan under his real name in the 1940s and 1950s. This facilitates a strong positioning of Keenan alongside several significant moments in Irish literary history. This is underpinned by the extensive critical introduction that defines both the perimeters of Keenan’s place within the Irish literary tradition, as well as establishing the corridors of connectivity through which his interaction with bohemian Dublin and subsequently The Honest Ulsterman were developed.

The work offers explicit, thematic and stylistic connections between the two literary eras from the interplay between Keenan’s early work for Envoy and the unpublished material utilised and presented in the volume for the first time. In addition, a significant battery of personal letters between Keenan and the H.U editors, Michael Foley, James Simmons and Robert Johnstone is presented within the book’s introduction to highlight the extent to which the group sought to draw on and adapt the literary approaches of Kavanagh et al to facilitate a transcendence of the brutal realities of 1970s Belfast.

This book is intended for scholars of both Irish literature and history, as well as those engaged in the study of peace building and conflict studies, given Keenan’s representation of Belfast as a city possessed of more than sectarian antagonism. The joint presentation of original literary fiction alongside a weighty academic introduction will appeal to those involved directly in the academic study of Irish culture, and those with a more general interest in the literature and history of 20th-Century Ireland.

James Gallacher is a researcher at the Institute of Irish Studies, University of Liverpool. He is focused on the literary history of Mid-20th-Century Ireland, particularly in relation to the development of literary and artistic networks during the ‘Emergency’ period. He is the Literary Editor for the Liverpool Postgraduate Journal of Irish Studies.

"Gerard Keenan, also known as Joe Biggar and Jude the Obscure, seems to have circulated under the literary radar in Bohemian communities in his native Belfast. James Gallacher connects the author’s literary strands of journalistic, critical, and creative writings into one volume, Bohemian Belfast and Dublin: Two Artistic and Literary Worlds, in the Work of Gerard Keenan. The collection sheds new light to the author’s legacy, rescuing unpublished work from his later years and uncovers a wealth of essays and short novels produced over the course of his professional life.

Those unfamiliar with Gerard Keenan, or who will be re-introduced to him outside of his work as Jude the Obscure (a contributor to the Honest Ulsterman) will find a meticulously researched collection here. Gallacher weaves Keenan’s critical and creative work together to position him as a leading figure moving between Bohemian Belfast and Dublin where he traversed artistic, literary, political, and social circles. Gallacher frames each selection chronologically with a richly detailed backstory in a well-researched introduction. Providing relevant historical context, he fills in biographical information and offers literary analysis of Keenan’s experimental fiction.

This volume will be of interest to scholars of Irish periodical culture and history and others interested in the workings of the Belfast and Dublin Bohemian life of the twentieth century." - Professor Kaitlin Thurlow, University of Georgia.