Women, Art and Nationalism in the Irish Revival

The contribution of women to the construction of modern society has been largely forgotten in Irish history. Even though the interest in women’s studies has improved in the past decades, adding women’s names to history is not enough: we need to question its basis, Adela Flamarike argues in this original new book.

The focus on female visual art gives new clarity to the participation and circumstances of Irish women in the Irish revolution and the creation of modern society. It recovers some of the voices that have been silenced and the experiences that have been forgotten by giving them an aesthetic platform.

This book is a major attempt to explore the construction of womanhood created by nationalism and the Irish Revival, to investigate whether female artists challenged this idealised representation of the feminine and, if so, how they did it.

It exposes female participation in the Irish cultural scene by interrogating the new styles and techniques that women artists and craftswomen in Ireland developed between 1890-1922. It  focuses in particular on two groups of women – those in the Arts & Crafts movement - whose guilds sought to offer poor women a self-determining future - and those women who travelled to the continent (notably Paris) to gain an art education which they then they integrated into their creative practice on returning to Ireland.

Adela Flamarike shows that if we ignore female creation, the history of art will remain complete, and false. This book seeks to recuperate female artworks of the Irish Revival in order to contribute to creating a more complete and true history of art and therefore of culture. It also re-frames a history of art in an unbiased manner. Analysing the representation of the Irish reality painted by female artists provides a better picture of what happened and how women participated in the nationalist movement while engaging or not with feminism.

The author shows that culture has played a very important part in Ireland’s current process of identity definition. Irish nationalism utilised the image of the woman as a mark of the fight for independence, developing an archetype of a weak woman that needs the protection of a man. The reconstruction of the nation once independence was gained was based on the same stereotypes, and the consequences are still visible in rights and experiences of Irish women nowadays.

Analysis of this concern has only begun very recently, with work on such authors as Maria Luddy, Gerardine Meaney or Sinead McCoole. However, although studies about female artists in the Irish Revival are also increasing [as we can see in the writings of historians such as Éimear O’Connor or Nicola Gordon Bowe] the researching of women artists’ roles is still limited. Many studies are also biographical records which do not focus on the context, circumstances, symbology, or the role of Irish women in Irish nationalism.

In the period leading up to the formation of the Irish State, governed as it was by masculine and authoritarian values, it was not acceptable for women in Irish society to claim or pursue the life of the artists. Creativity, renovation and innovation were valued as key components of life before, during and after revolution, and yet intellectual women at the beginning of the 20th century had to claim their capacity, talent and values in the shadows of their female fellows. As culture emerged as the mode of expression of nationalist ideas, visual artists were still considered less than those who dedicated themselves to literature.

In this context, female artistic talent was considered a simple pastime for well-off women, even though many of these artists were active in the nationalist political and cultural revolution at the end of the 19th century. Yet the author shows that the image of the woman as a nation was systematically used by the nationalist discourse, especially in the cultural context. Both nationalism and Catholicism had a major influence developing a very particular imagery of the Irish woman whose consequences are still perceptible in the experiences of Irish women.

The book analyses Irish writings, literature and art of the period so as to sum up the image of womanhood developed before and during the Irish Revival. Many of these sources are, paradoxically perhaps, reflective of the patriarchal context to which they were speaking, and so a transversal perspective is the main axis of this study. Through this perspective, the Adela Flamarike examines society, history and art in this period, when the circumstances of female artists were significantly different to male artists.

It explores the way in which artists such as Beatrice Elvery summarized the characteristics of the Irish identity. And it analyses the representation of peasant women through the artwork of Margaret Clarke and Lilian Lucy Davidson. It shows, too, how the artists Constance Markievicz and Kathleen Fox represented the Irish revolution. The Arts & Crafts movement is examined through the work of Susan and Elizabeth Yeats and the Dun Emer Guild and Cuala Industries, and through the stained-glass project led by Sarah Purser in An Túr Gloine. In addition, the book discusses the arrival of the avant-garde in Ireland by the hands of Mainie Jellett and Mary Swanzy.

The Author was born in 1990 in Navarra, Spain; studied a degree in History of Art at the Basque Country University in Vitoria, and Saint Louis University in Brussels, Belgium. Her final project entitled “Women, Art and Exile. The subversion in the artwork of Leonora Carrington and Remedios Varo” won the Francisca de Aculodi award as part of a gender perspective project in the Basque Country University in March 2015. In 2014 she travelled through Ireland and finally settled in Westport. She has collaborated with the Chilean cultural magazine AguaTinta as a monthly columnist. This involved critical and political study of various artworks and artists through the lens of gender perspective. She holds a First Class Honours Master’s Degree in Applied Research in Feminist, Gender and Citizenship Studies at the Jaume I University of Castellón (Spain).

"Adela Flamarike is putting these Irish women artists back where they rightly belong. The women she has written about are the tip of the iceberg. They were trailblazers in their personal and professional lives, who let nothing stand in the way to creativity. Adela has done a tremendous job in telling their stories and by doing so she has given back to the Irish people a forgotten aspect of our past. She has done these women proud." -  Liz Gillis, author of Women of the Irish Revolution, Revolution in Dublin, and The Fall of Dublin. 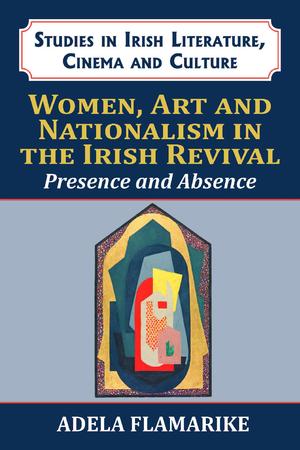