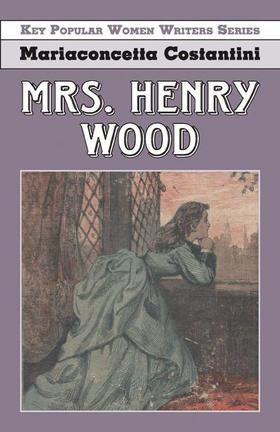 This new book examines the career and works of Mrs Henry [Ellen] Wood [nee Ellen Strand Price, 1814-87), the author of the enormously successful and sensational mid-Victorian bestseller: East Lynne (1861), and many others.

Thomas Seccombe’s DNB notice of Mrs. Wood in 1900 said that The Channings had sold 200,000 by 1898; The Shadow of Ashlydyat (1863) had reached its 150th thousand, and her other titles were continuing to sell strongly up to the second world war of 1939-45. East Lynne, her most famous novel, sold more than 1 million copies and Danesbury House sold 100,000 copies in her lifetime.

Such a prolific novelist who enjoyed literary success and fame during her life, Wood dwindled to a minor literary figure in the following century as a consequence of fin-de-siècle changing literary tastes. However, in recent years, Wood has become the object of renewed scholarly interest but attention is still mostly paid to East Lynne.  As Professor Costantini now shows, what is needed is a wider exploration of her oeuvre as well as a reflection on some elusive aspects of her professional figure.

Wood shunned publicity and led a quiet family life despite the important role she played in the Victorian print industry. In ways similar to her life, her oeuvre still challenges interpretation as it perplexingly combines sensationalism with domestic ideals. By reading Wood through the lens of feminist theory, this book sheds new light onto relevant aspects of her career and personality. The book is devoted to the complexities of her fiction. It ascertains the extent to which her generic experiments and characterisation convey a subtle critique of gender roles intertwined with seemingly reassuring images of domesticity.

Contents: Introduction. Ch.1: The necessity and traps of Victorian marriage;  Ch. 2: Variations of the Griselda theme; Ch. 3: Desiring subjects and the effects of immoderacy; Ch.4: The transgressive lady and the failings of patriarchy; Ch.5: Unconventional low-class women; Bibliography.

Mariaconcetta Costantini is full professor of English Literature at G. d’Annunzio University of Chieti- Pescara, Italy. Her research mainly focuses on Victorian literature and culture, with a special interest in sensation fiction and the Gothic. She is the author of five books and has edited volumes on Victorian literature and culture, in addition to publishing numerous articles and book chapters both in Italy and abroad. Her publications on sensation novelists include the monographs Venturing into Unknown Waters: Wilkie Collins and the Challenge of Modernity (2008) and Sensation and Professionalism in the Victorian Novel (2015), as well as the collection of essays Armadale: Wilkie Collins and the Dark Threads of Life, ed. M. Costantini (2009).