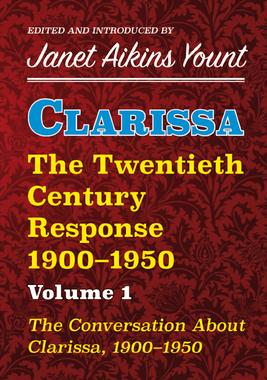 This commanding two-volume project on Samuel Richardson’s classic is an essential source for 18th century studies. It presents the most valuable critical, intellectual and aesthetic responses to this great novel from 1900 to 1950, when Frank Kermode re-assessed the relative significance of Richardson and Henry Fielding and affirmed the superior “value” of Richardson’s moral and formal achievement.
Professor Yount pursues four main goals: to place the critical materials she has gathered here and reprinted in their immediate historical contexts; to offer insight into works conceived at a time when the discipline of English studies as we know it was in its earliest stages of development; to illuminate the significance of responses toClarissa that seem outdated or naive by today’s scholarly standards; and to identify recurrent themes, highlighting the novel’s ongoing and often controversial appeal in the first half of the twentieth century.
These volumes reprint key commentaries and provide an introduction to the materials reprinted. They also offer scholarly background to these and discuss others omitted for reasons of space.

On the editorial principles of this ambitious project Professor Yount says that:

“Choosing which materials to reprint and which to omit was a challenge, one also faced at the start of the twentieth century by the celebrated American poet and editor Richard Eugene Burton, who proclaimed Richardson to be the “founder of the modern novel” (105) in Masters of the English Novel (1909). There, in assessing the relative merits of fiction writers from Richardson to American novelists of the early twentieth century, he boldly asserts, “the principle of inclusion in this book is the traditional one which assumes that criticism is only safe when it deals with authors who are dead,” deflecting potential attacks on his declared “masters.” “[T]he dead,” he adds in a “light-minded” tone, “cannot strike back.”7 Although the death of the author is not a defining criterion for inclusion in the present volumes, the rationale behind my choices may not be more readily apparent, for the individuals represented here differ widely in discipline or profession, degree of prominence or obscurity, personal history, national origin, and purpose. Indeed, gathering works of such variety was one of my goals, a way of affirming Clarissa’s wide-ranging importance.

“As might be expected, most selections come from the Euro-American world, but as far as possible I include or mention non-western responses with the aim of dismantling boundaries that sometimes limit English language scholarship. The process of construct­ing this anthology was also a reminder that the impression left by scholarly and literary accomplishment is sometimes fleeting, a fact I attempt to rectify, as, for example, in my remarks here on Ethel McKenna’s 1902 Richardson edition or in my discussion of the earlier career of Harold Williams, a scholar most remembered for his later, groundbreak­ing work on Jonathan Swift. Through my discussion in The Conversation about Clarissa, 1900–1950, I hope to refresh our understanding of the culture and the era in which the reprinted materials were conceived. Together these two volumes not only document the resilient interest and lasting importance of Richardson’s novel, but also illustrate the func­tion and powers of literary art more generally.

“This anthology differs from “critical heritage” or “best essays” collections in which each entry earns a place through the editor’s belief that it offers an original or indispensable insight. Instead, my selections chart Clarissa’s critical reception to illuminate the evolving cultural issues and changing political circumstances that have shaped that very recep­tion. Toward this end, I include responses not only from literary scholars, but also from public officials, novelists and other artists, librarians, historians, journalists, and diverse social commentators on the twentieth century itself. This collection provides, in effect, a cultural and literary history of the early twentieth century, displayed in the ample and varied response to Richardson’s novel.

“To narrate that history I divide the discussion in volume 1 into four temporal units within which I perceive cultural affinities: responses to Clarissa from 1900 to 1914 (the year the first World War broke out), from 1915 to 1930 (when the Shakespeare Head Edition of Clarissa displayed to readers of the twentieth century important typographical features in the third edition), from 1931 to 1944 (the end of the second World War), and from 1945 to 1950 (at the start of the Cold War). In each section I explore concerns shared among the texts reprinted, urging readers to move beyond considerations of Richardson’s achievement and reflect upon the implied questions or unspoken historical circumstances that prompt each commentator or artist to respond to the novel. In volume 2, biographi­cal headnotes to the entries invite further investigations into the lives of their creators. My hope is to engage readers as active participants in the implied “conversation” about Richardson’s novel, as here presented, for years to come. “

Janet Aikins Yount is Professor Emerita of English, University of New Hampshire, where she taught from 1979 to 2012.

"Thank you, Janet Aikins Yount, for doing the heavy lifting for future scholars of Samuel Richardson!   Never before have we had a critical heritage study of Clarissa this voluminous and complete.  Documenting the novel’s influence through two world wars and up to the start of the Cold War, this meticulous combination of critical commentary and source material shows how Richardson’s eighteenth-century masterpiece rippled through the intellectual waters of the twentieth.  Yount’s go-to reference work is sure to launch a new wave of interest in the most important novel ever written".  - Professor Janine Barchas, Louann and Larry Temple Centennial Professor in English Literature, University of Texas at Austin.

"Janet Aikins Yount's remarkable edition of Clarissa: The Twentieth-Century Response 1900–1950 will prove a treasure trove for scholars and critics, including myself. After reading the whole, I marvel at Yount's commitment and first-rate analysis. Clarissa fully deserves the implied compliment, for even now, as Yount shows, Richardson's masterpiece remains a touchstone for academics and creative writers. "

"In these volumes, Yount provides nothing less than an absorbing cultural and literary history of the early twentieth century. In the first, she argues convincingly that historical circumstances shaped different responses to the novel. In the second, she proves her case with a collection of comments about this brilliant, moving, and controversial work. A hundred years later, her revelation of a continuous, lively engagement with Clarissa speaks to current concerns such as the material conditions of production, contextual studies, and reception theory."

"Janet Aikins Yount's edition is a fine achievement. It will be warmly welcomed as a major publication in literary studies."

"The two volumes that make up The Conversation about Clarissa, 1900-1950 will delight readers of Samuel Richardson and students of eighteenth-century fiction alike.  The first volume offers by way of introduction a fascinating tour of the most important ways in which twentieth-century Modernism understood Richardson  –  as an early apostle of feminism, a sociologist of the family, and a psychologist of individual sexual identity – while the second volume presents the considered opinions of threescore commentators, each entry accompanied by an informative headnote."

"Not every modernist scholar-critic embraced Clarissa but Virginia Woolf, E. M. Forster, and D.H. Lawrence engaged in vital debates about its substance, style, and narrative technique.  Alongside these novelists are several literary critics well known to the academy, Austin Dobson, Ian Watt, and Joseph Wood Krutch, and many more who deserve to be better remembered, like Sheila Kaye-Smith and Dorothy Van Ghent.  It’s rare to read a work as authoritative, comprehensive, and at the same time as perceptive as this reception study.  Its presentation of these and other voices from across the Anglophone world will help make possible a thorough reconsideration of Richardson’s place in the rise of the novel.  Students of the history of formal realism, the nature of bourgeois heroism, the rise of English studies in continental Europe, and the relation of early fiction to the intellectual and cultural history of its own time and ours, especially, will profit enormously from these pages." - Timothy Erwin,  Professor of English, University of Nevada, Las Vegas. 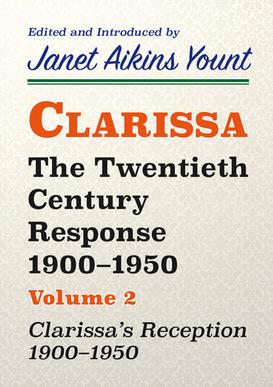