Co-operation as 'This New Order of Life.'

Holyoake was a classic example of Gramsci’s working-class ‘organic intellectual’.  An Owenite ‘social missionary’, he became a Radical Liberal, Secularist and Co-operator, responsible for the legend of ‘the Rochdale Pioneers’.  A journalist, thinker, multiple ‘joiner’ and promoter of freedom in many settings, Holyoake was also a highly-readable stylist.  An influential 19th century public figure, his life and work have recently been neglected among co-operators as by well historians. The case for reviving work on his ideas is powerful.


Volume 2. A New Life, The Religion of Socialism in Britain, 1883-1896: Alternatives to State Socialism.

Volume 3.Class Conflict and Co-operation in 19th and 20th Century Britain.  Education for Association: re-membering for a new moral world.

​This book begins with ‘ways of seeing’ the lives and times of religious and other organisations as instances of cultural creativity, and as rival clusters of social potential.  It tells the story of class conflict over forms of association - for example between the Friendly Societies and the private insurance industry since National Insurance began with Lloyd George in 1911.  Stephen uses his experience at Ruskin College to think practically as well as historically about co-operative schools, ‘access’ to Higher Education and the idea of a co-operative university.

Professor Yeo was Principal of Ruskin College, Oxford, 1989-97 and since then has been Chair of the Co-operative College and the Co-operative Heritage Trust in Manchester and Rochdale, engaging with and writing about the movement.

Stephen began his adult life as a Labour Party Parliamentary candidate in the elections of 1964 and 1966.  As a social historian, he is known for his work on association, cooperation, labour movements and religious and voluntary organisations. He taught at the University of Sussex for 25 years, and he was also active in Brighton’s community politics.

“A great read. The Holyoake that emerges is a revelation!” - Nick Matthews, Chair Co-ops. UK.

"Stephen Yeo's mighty fable takes us right into the heart of another way of being governed, and shows how close 19c Cooperative and Mutual movements got to repairing some of the capitalist ills that so affect us now.  As Labour's central state-in-waiting is promising all we can ask for in the sure  knowledge that it can't possibly be delivered, by impressing upon us the size, scale and sheer achievement of independent cooperative projects before the rise of Labour, this is a book with a lot to say about our future out of our past." - Robert Colls History Today November 2017

“A classic study of one of the co-operative movement’s most successful nineteenth-century proselytisers.” Professor Tony Webster, Professor of History Northumbria University.

“I can only praise this account of a great, complex and authentic co-operator. It is going to be extraordinarily welcome.” - Ed Mayo, Secretary General, Co-ops.UK.

“This is a fine essay on a figure of central importance to the history of co-operation. It is not a new biography, but presents rather an essay in the excavation and application of ideas. As an exposition of modern co-operative thought it will attract attention from a wide readership.”- Professor Gregory Claeys, Professor of the History of Political Thought, Royal Holloway, University of London.

“I found this great work absorbing, educational, stimulating and provocative. Holyoake’s writings, and his times are expertly mined, to convey a powerful sense of his ‘character’, his tone of voice, his commitments and his vision.  It is beautifully written, passionate and erudite.” - Dr. Gill Scott, Deputy Head, School of Humanities, University of Brighton.

“The figure that emerges from this deeply committed work is that of an individual who regarded the ‘art of association’ as it was practiced by thousands of working-class co-operators as a stepping stone to a ‘new order of life’, an alternative religion that would dissolve the power of both capitalism and the state without the need for violent action.“- Professor Peter Gurney, Professor of British Social History, University of Essex.

“An eye opener… It is a fascinating and beautifully written labour of love: professional, rigorous and full of thought provoking material. “ - Sir Graham Melmoth ,Chief Executive of the Co-operative Wholesale Society (CWS), 1996-2002.

“A fabulous document: rich and full of diverse angles of Holyoake’s life phases and different work foci, plus highlighting successes and real set backs. The thematic and mission of being in the business of making wrong and poverty impossible is so well set out… How little do co-operators really discuss this economic democracy question today! It is so fundamental for transition and transformation to revive this understanding and focus. Such fragments can become a new anti-politics. ..The way democracy has been niggardly allocated by the state and how this was spotted in the 1870s by Holyoake is so completely undiscussed today. Back again to economic democracy as a mission or what I like to call daily democracy like daily bread and part of everyone’s life.”–  Pat Conaty, Research Fellow New Economics Foundation; Research Associate Co-ops.UK.

"Yeo's special and unusual book [Vol 2] is part of a longer three-volume disquisition on what went wrong with socialism tout court and how we might be able to regenerate it by thinking beyond the state. Thinking beyond the state is not easy, but it is worth remembering that up to 1914 Britain was the theatre of very large cooperative and associational enterprises....Stephen Yeo brings us closer to future possibilities by breathing new life into old ones." - Professor Robert Colls, Literary Review.

“Yeo, who was formerly an historian at Sussex University and then Principal of Ruskin College, Oxford, has written a scholarly ‘causerie’ on alternatives to State Socialism based on luminous description and analysis of alternative forms of socialism that developed in Britain in the nineteenth and early twentieth centuries…Yeo is consistently asking the questions: ‘What is the use of this for us today?’ ‘Is this more than dead history?’ and ‘What can we learn from this?’

“Holyoake’s practice of the ‘art of association’ and its ability to transform human social and productive relations in the here and now offers for Yeo a key to non-violent revolutionary reform, an antidote to the statist mentality of politicians who believe socialism can only be introduced from the top down and to the Fabian collectivists who believe society can only be managed by a class of administrative and technical experts.

“Volume Two continues this line of attack with critiques of the now customary versions of centralised command-state versions of governance that have become identified with ‘socialism’ and with the ‘new’ professional and managerial class that is intensely suspicious of the political agency of working people. Yeo movingly evokes the joyful dynamism and creative intelligence that energised the working-class ‘religion of socialism’ of the late nineteenth century, often from original source material.“Yeo’s book does us the rare favour of carefully excavating and revealing the world of the nineteenth and early twentieth centuries’ working-class movements, when ‘socialism’ could not neatly be pigeon-holed in the attenuated way it later became. His mining of Holyoake’s papers in Holyoake House in Manchester has allowed us once again to hear this resonant but neglected voice in British socialist history…. he has vividly stated the case for reclaiming the vital Associationist tradition of socialism ‘from the enormous condescension of posterity’ and holding it to the light.” - Dr. Tom Steele, Marx and Philosophy Review of Books.

The History of Association, Cooperation and un-Statist Socialism

Volume 2. A New Life, The Religion of Socialism in Britain, 1883-1896: Alternatives to State Socialism.
Volume 3. Class Conflict and Co-operation in 19th and 20th Century Britain.  Education for Association: re-membering for a new moral world. 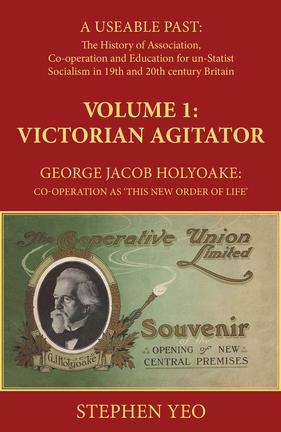 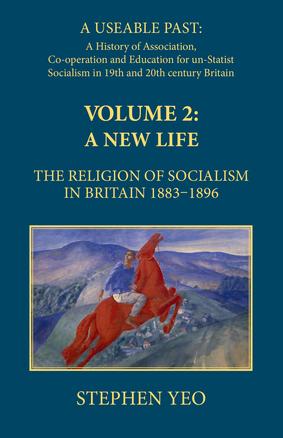 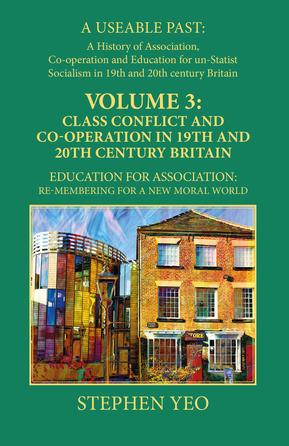