Lloyd George and the Challenge of Labour:
The Post-War Coalition 1918-1922 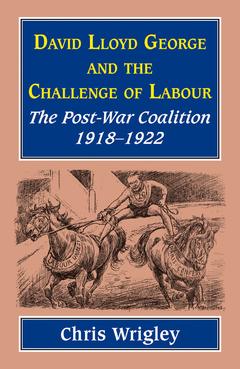 Lloyd George was the 'Man Who Won The War', and a key figure in seeking to resolve the issues of peace. These years were marked by labour unrest, unemployment and strife.

The way in which his post-war coalition government handled the unprecedented upsurge of labour unrest set much of the tone for the inter-war years. This book shows how the leading radical and practical reformer of British politics - who always believed in a juster society - was an undoctrinaire man and a reconciler of conflicts but who somehow became associated with reactionary forces, both in industrial relations, in intervention in bolshevik Russia, and in Irish policy.

Churchill said of Lloyd George: “Much of his work abides, some of it will grow greatly in the future, and those who come after him will find the pillars of his life’s toil upstanding, massive, and indestructible.” He spoke of his “power of living in the present without taking short views.”

Wrigley demonstrates how very skilful Lloyd George was in defusing challenging situations at home with mastery - such as the unrest in mining, in the armed forces and in the police.  He was the incomparable creative and persuasive conciliator, and his response to crises was a firm and determined one both in public and in private. He was able to call, too, on the clarity of his political vision and on his experience in his earlier social reforms which affected the lives and happiness of millions.

Winston Churchill described him as “the greatest political genius of his day” with “more insight than any other statesman.” This book is a key contribution to our understanding of the dilemmas of the inter-war period, and of the great man himself.

“Wrigley’s study of the Lloyd George coalition… {presents} a wealth of new material and judicious interpretation of events which contribute significantly to our understanding of the reconstruction process in Britain.” - Jonathan Zeitlin, Social History.

“Wrigley is at his best in seeing how the government’s response to events in Russia and Ireland -as well as the protracted problem of peace-making – impinged on Lloyd George’s industrial policy, just as continuing fissures within the coalition impeded his hopes for a program of social reconstruction and for a fusion of moderate Tories and Liberals in a new Center Party.” - John W. Brennan, History: Review of New Books.