Numunwari is a gigantic salt-water crocodile – sacred to the Aboriginal community, and the keeper of the secrets of their ancient customs.

It lives in Arnhem Land in a remote part of northern Australia. But when it moves downstream terror breaks out.

This is the most exciting, fast-paced and challenging novel of wild-life and cultural conflict which you will ever read.

It will cause you to reflect deeply on the fate of Aboriginal cultures, and on the contemporary plight of ancient animals.

It is an acclaimed fiction based on fact.

This is an adventure tale set amidst the mystery of Aboriginal Dreamtime. The crocodile is a symbol of the Aboriginal people's timeless culture threatened with destruction by the white man's ways.

For reasons which the novel reveals, Numunwari leaves its remote domain, and swims downstream, asserting its authority in its domain, and transforming the coastal City of Darwin into one of terror.

The challenge this represents opens out disturbing and fundamental questions about our relationships with wild life.

The book is full of the rough, tough characters, ruthless criminals and opportunist politicians of Northern Australia. It also features the Aboriginal Oondabund, the creature’s hereditary guardian. The events are set in the ancient and tropical ‘feel’ of a mysterious landscape. The novel offers many insights into culture, and conservation.

The author is the leading global expert and scientist of crocodile life. He is a globally-recognised and award-winning leader of the conservation and management of wildlife resources. Notably on the concept of conserving wildlife through sustainable use programs.

Professor Grahame Webb is a leading figure in zoology and in environmental protection. His major interest has been the biology, conservation and management of crocodiles, a group which he has done much to protect. His novel was inspired by three years’ work with Aboriginals on the saltwater crocodiles of Arnhem Land where he became familiar with their traditional environmental management

He has been instrumental in helping the survival of animals that have existed unchanged for over 150 million years. He first started research on crocodiles in 1970. As a Professional Officer in the School of Physics at the University of Sydney, Sydney (1973-77), he began full-time and pioneering research into the biology and ecology of the Saltwater Crocodile (Crocodylus porosus) in northern Australia. During this period he worked closely with Aboriginal people in Arnhem Land,

He has held many academic and official positions, and in 2000 was appointed as Adjunct Professor at Charles Darwin University, reflecting his outstanding contribution and dedication to research and education. He has developed the leading crocodile research and education centre in Darwin, Crocodylus Park, promoting public education about wildlife conservation and sustainable use issues.

​“One of the best of the reptilian menace novels, this scores bonus points for its use of Aboriginal culture and religion, a fascinating subject not often encountered. The author knows his stuff and it shows, and in what is his first and only novel, he shows that he can also write a good tense yarn. It is surprising that most crocodile horror novels don't play up the gore aspect, and this is no exception, regardless of the lurid title. It is basically an extension of Webb's personal philosophy that crocodiles are feared mainly through public misunderstanding, and he makes a good case. Recommended.”  - The Last Page Bookshop. 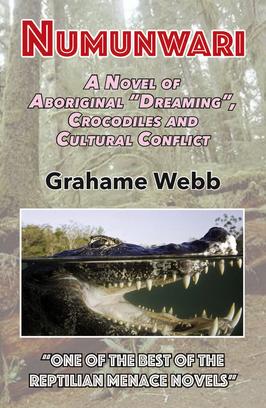 A Novel of Aboriginal "Dreaming", Crocodiles and Cultural Conflict

​“One of the best of the reptilian menace novels."