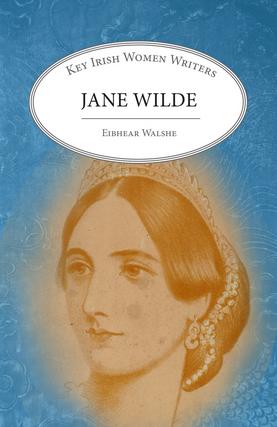 Jane Wilde (1826 - 1898) – née Jane Francesca Elgee – was the mother of Oscar Wilde, but Eibhear Walshe shows that she was a notable poet, translator, and political pamphlet writer in her own right. Born in Wexford, she contributed to The Nation under the name of ‘Speranza’, and issued a call to arms on behalf of the Young Irelanders. She translated Lamartine’s French Revolution (1850) and Dumas’s Glacier Love (1852). Her salon with her husband Sir William Wilde was a key centre for artists, academics, and visiting dignitaries. Lady Wilde moved to London after his death.

Highly regarded as  a writer and  a scholar in her own lifetime, the reputation of Jane Wilde suffered greatly with her son’s disgrace. He was himself keenly aware of the impressive nature of her achievements. Writing in his prison testament De Profundis, he said that “She and my father had bequeathed me a name they had made noble and honoured, not merely in literature, art, archaeology, and science, but in the public history of my own country, in its evolution as a nation.”

The work offers a short chronological study of the life and the writings of Jane Wilde, dealing with her education, her career as political activist and editor of The Nation, and as revolutionary and translator. It draws on her own writings and her recently published letters to give an account of her working life, her place within mid–nineteenth century Irish cultural nationalism and her relationship with other leading writers of her time. The book includes an extensive bibliography and a chronology of her life.

About the author
Eibhear Walshe is a senior lecturer in the School of English at University College Cork and Director of Creative Writing. His biography Kate O'Brien a Writing Life was published by Irish Academic Press in 2006 and he edited Elizabeth Bowen: Visions and Revisions for Irish Academic Press in 2008. He edited Elizabeth Bowen's Selected Irish Writings for Cork University Press in 2011.  His first novel, The Diary of Mary Travers was published in 2014, shortlisted for the Kerry Fiction Prize 2015 and long listed for the Dublin International Literary Award, 2016.  His study of Colm Tóibín, A Different Story, was published by Irish Academic Press in 2013. Modern Ireland in 100 Artworks, co-edited with Catherine Marshall, under the editorship of Fintan O'Toole was shortlisted as Irish non- fiction book of the year 2016.