This landmark book is an influential and irreplaceable work wherever British political history is studied.

Vincent analyses the key channels which were part of the everyday life of millions: the cheap press, militant Dissent, organised labour, the Reform agitation, the working-class club and society movement, and the explosive ardour flashing between great names and great crowds.

These agencies at work in the nation contributed to the Liberal Party’s conquest of public opinion.

The author describes at root level how the Parliamentary Whig Party developed into a national Liberal movement, dominating government for decades.

The parts played by the leading men – Gladstone, Bright, Mill, Russell and Palmerston – are analysed in detail, as they came to represent great forces in the nation.

For the voter, Liberalism often involved a sense of individual self-determination, novel both in that it operated in previously dependent sections of society, and that the purpose to which this new freedom was put was more acceptance of the political system than rebellion against it.

Here, too, the basis of Gladstone’s commanding influence, including on working men, is uncovered and presented with much originality.

The author is Emeritus Professor of Modern History, University of Bristol.

“It will probably turn out in the long run that Mr. Vincent has reshaped British political history of the mid-nineteenth century.” – A. J. P. Taylor. 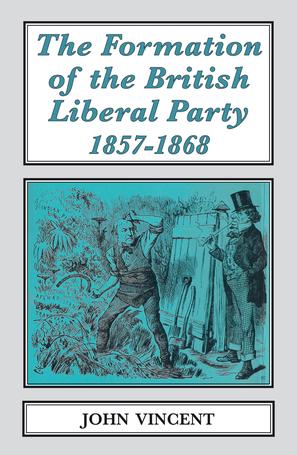