The British Army in Flanders: The Diary of Achiel Van Walleghem . 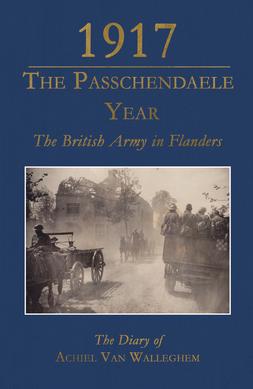 This unusual work offers a personal documentary and highly individual witness to the terrible events in Flanders in 1917.

Many thousands killed, to no avail; the trenches full of mud; the total annihilation of the landscape; attempts to break through to victory which only produced minor movement forward, and at a terrible cost.

This book tells the previously untold story of daily life immediately behind the frontline during the tragic year of 1917.

The author, who kept a detailed record of events and attitudes, was a village priest, Achiel Van Walleghem. He lived in Reninghelst, just west of Ypres, and kept an extensive day-by-day account.  He was very well informed by the officers lodging in his presbytery. And, urged by his innate curiosity, he witnessed and noted the arrival of the first tanks and the increasing importance of the artillery. He also visited the camps of the Chinese Labour Corps and the British West Indies Regiment. On 7 June 1917 he awoke early to see the enormous mines of the Battle of Messines exploding. And he was present when a deserter was shot at dawn.  He records all this - and much more - with an unusual humanity.

As a bystander living amidst the troops, he often had a special view of the events that unfolded before his eyes. Van Walleghem notes much that mattered to the soldiers there, and to the local people. This includes the influence of bad weather on the mood and morale of both troops and civilians, as well as military events.  His comments on the different attitudes of English, Irish, Australian or other Empire troops and divisions are often priceless. But Van Walleghem equally records the misery of the local Flemish population and their relationship with the British rank and file: in bad times such as when a local is accused of spying, but also in good times when a village girl gets married to a British soldier.

This diary is not just a forgotten source of the western front, it is one that will forever change our views on the conflict, and on how men and women tried to cope.

In a year when many works will be published about Passchendaele this is a unique book.

It has been edited for publication by Dominiek Dendooven, the noted scholar on the conflict in Flanders, and translated from the original Dutch by Professor Guido Latré Professor of English Literature and Culture,  and Susan Reed, researcher in English Linguistics (Université Catholique de Louvain).

"The most important civilian diary from the Great War in Flanders"

​"Here, in Van Walleghem’s diary, we see the war from a completely different perspective with a host of themes and preoccupations hardly perceived by British soldiers at the time, and commentators ever since."
​
"Van Walleghem served throughout the conflict. A committed, intelligent, imaginative man, he faithfully recorded everything he saw around him, usually accompanied by an acute judgement or insight. Thanks to this English translation of his diaries for 1917, the Anglophone world has the chance to access this highly-illuminating glimpse into life behind the lines from the point of view of a local inhabitant."