This work by the award-winning sports historian goes beyond scores and results to present a unique view of Britain’s sporting past.

This involves looking at the dark side of sport, the use of alcohol as a performance enhancing drug, the violence of football hooligans before the First World War, the tribulations of weight-watching jockeys, and the employment of children as young a seven as golf caddies.

He highlights  the pioneering role of women in golf - a sport in which they have often been considered subordinate to men. He also focused on the courage shown by amateur jump jockeys in piloting their mounts over fences and hurdles.

An examination is also made of the organisation of hunting, shooting and fishing – all sports which flourished in the nineteenth century despite apparently having no rules.

The myth of the early control that the Jockey Club exerted over horseracing is exposed. And the nationality problems associated with team selection for the Ryder Cup are discussed. Other chapters offer critiques of approaches taken to researching sports history, the application of the concept of modernisation to sport, and the development of sports museums in the burgeoning sports heritage industry.

Wray Vamplew’s classic book on the development of commercialism and professionalism in sport, Pay Up and Play the Game, won the inaugural North American Society of Sports History book of the year prize and his research generally has gained awards from the Australian Sports Commission and the International Society for the History of Physical Education and Sport.

Golf: Women to the Fore: Accommodation and Resistance at the British Golf Club before 1914; The Rough and the Fairway: Processes and Problems in Ryder Cup Team Selection 1927-2006; Child Work or Child Labour? The Caddie Question in Edwardian Golf.

How the Game Was Played
Essays in sports history. 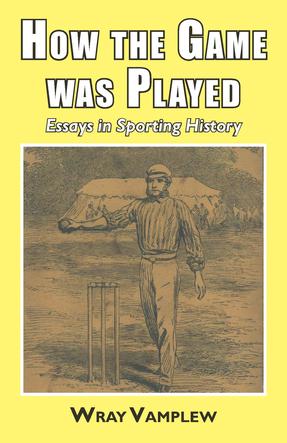