a History in Aspects

About this book
​
Publishing History, if not the orphan, is the Cinderella of English Studies - a subject which has never owned its own discipline or curricular space in academia. Professor John Sutherland’s interest is in the culturally formative effect of the institutions and machineries of commissioning, manufacturing, legal frameworks, distribution, and reception. A recent interest is in libraries and e-publishing. His approach has always been materialistic.

A Jstor search will yield a sense of the variety and range of material Sutherland has written in the field: and the liveliness of mind with which he has done it.

This new collection gathers his major pieces, with generous additional interpretative comment, to define the lay of the field and points of illustrative interest in it. To map, as it were, a central area of publishing history, as a kind of summary of Sutherland's decades of work on the subject.

His periodical contributions have also done much to shape and re-shape the discipline. There is more than a monograph’s-worth of articles in learned and trade outlets by Sutherland. A solid core focuses on authors Scott, Thackeray, Dickens, Bulwer Lytton, Trollope, George Eliot, Mary Arnold Ward, Hardy, Henry James, ranging through to Stephen King and E. L. Doctorow. A related focus is on publishers from Archibald Constable, Henry Colburn, John Macrone, Chapman and Hall, George Smith, the Tinsley brothers et al through to Victor Gollancz and Frederic Warburg.

​John Sutherland is "the foremost authority on Victorian publishing." - Richard Mullen, Anthony Trollope. A Victorian in His World. 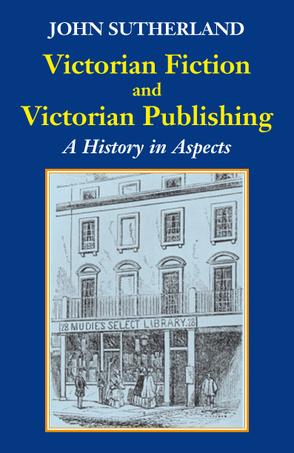