American Cheap ‘Libraries’, ‘Railway’ Libraries, and Some Literary Series of The 1890s.

The innovative, trail-blazing enquiry into the importance, range, and history of the publishers’ series in America and in Britain, by the widely acknowledged leading expert in this field.

From the introduction:
“Wherever you look, wherever you live, whichever publishers’ catalogue you open, whichever integral advertisement in a book you consider, whatever your interests, there is the series.

“There seems to be no issue, no concern, no topic, no theme, no adult, juvenile or specialist subject, no way of seeing, thinking about or commenting upon the world which does not have its ‘series.’ Every series carried its ‘messages’ and implied advice, targeting specific readers and market segments….It is fundamental to publishing in every continent.”

"A handy reference guide to publishers of cheap libraries of the railway age on both sides of the Atlantic can be found in John Spiers’ Serious about Series: American Cheap ‘Libraries’, British ‘Railway’ Libraries, and Some Literary Series of the 1890’s."  - John Adcock 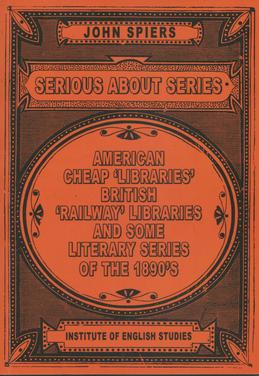