Late-Victorian England ushered in a new phenomenon, a ‘mass’ reading and book buying public. But it was a long time coming. How and when did this public ultimately emerge, and who reached it? Whose ambitions were achieved, and whose frustrated? What worked, and what didn’t? How were the most popular publications created, marketed, and sold?

The answers to these questions do much to fill out the uncompleted jigsaw of our attempt to understand the book trade, its production and structure, its ever-changing distribution methods, the widest and cheapest popular access to books, and shifting reading practices.

As Henry Hadow said in 1913, “There are three adjectives that have had a devastating effect on English life during the last generation: new; quick; cheap.”

Professor Spiers seeks to comprehend these factors, to unpack their connections, and to enquire within on many cultural dilemmas evident in the late-19th and early 20-centuries, and which are with us still.

Who actually did reach the intended new working-class and lower middle-class readers and book buyers in the evolving market, and how? In teasing out answers the book takes as contrasting exemplars John Ruskin (1819-1900), Richard Edward King (1854-1916), and George Newnes (1851-­1910).

The first a brilliant but quirky Cultural Sage, advocate of high culture, suspicious of democracy and of the practical workings of the book-trade, but a definer of key issues  whose words will live always.

The second a hustling popularizer but a morally doubtful book trade ‘character’: a clever but entirely commercially-minded opportunist, who used discounted prices, who pioneered deals with multiple-stores, but who was of limited editorial imagination and who is completely forgotten.

The third an exceptional, irrepressible, consumer-focused insurgent, an unusual innovator, the most successful in reaching the ‘ordinary’ reader and book buyer. 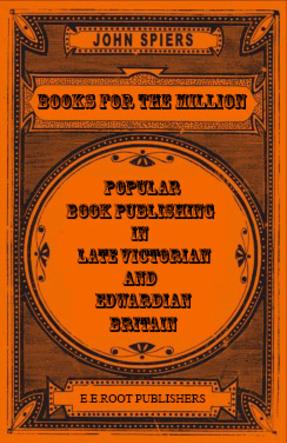