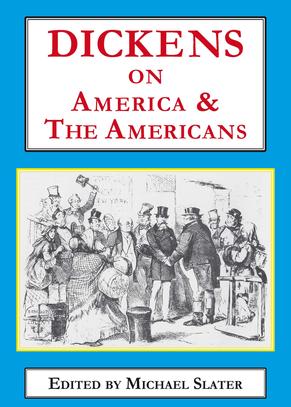 Dickens on America & the Americans

​Second edition with a new Preface by the editor.

This celebrated and fully illustrated work brings Dickens into close focus as a key commentator on America.

He turns his satiric pen on 19th-century American society during his visits in 1842 and 1867-68. This became what G.K. Chesterton called “Dickens’s great quarrel with America.” It became one of the most celebrated episodes in the history of Anglo-American cultural relations.

This large format, fully illustrated book traces the history of Dickens’s fascination with the young republic from his first glorious anticipations, through a period of bitter disillusionment, to a final reassessment and tribute to the nation.

Michael Slater, doyen of Dickens scholars and his major modern biographer, argues that Dickens was a natural American, and that he experienced the same love/hate relationship with his own country.

Dickens expressed many private opinions in his letters, and public views in his books, notably American Notes (1842) and Martin Chuzzlewit (1843-44). He comments on slavery, factories, social life, manners, and the Shakers. He caricatured the boastful, grasping, swindling Americans, taking his gleeful revenge. But he relented and his triumphal reading tour of 1867-68 posed a revealing contrast to his earlier attacks.

​Professor Michael Slater is the author of the standard modern life of Dickens, Emeritus Professor of Victorian Literature at Birkbeck College, University of London, past President of the International Dickens Fellowship and of the Dickens Society of America, and former editor of ‘The Dickensian’.

“In this splendidly-illustrated book the renowned Dickens scholar Michael Slater takes us on two Transatlantic journeys with Dickens and in each case brilliantly shows us both the dramatic impact America had upon him and also America’s lively response to him.’ - Miriam Margolyes.

“Slater’s is arguably the most packed conspectus of the subject now on record … he … succeeds both in painting the historical backdrop and in recording Dickens’s own pulse-beats as they register the patient’s hyper-mania or gloom.” Edgar Rosenberg, The Dickensian.