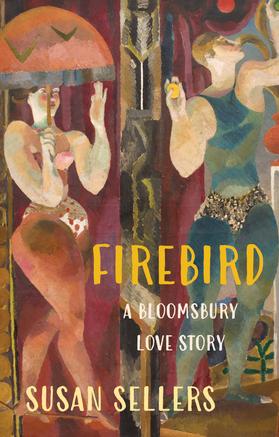 ​​This richly imagined novel tells the surprising story of two of Bloomsbury’s most unlikely lovers – John Maynard Keynes, the distinguished economist, and the extrovert Russian dancer Lydia Lopokova. Firebird is the third novel of prize-winning author Susan Sellers, who is also an expert on Bloomsbury and the writing of Virginia Woolf.

It is the winter of 1921 and Diaghilev’s Ballets Russes launch a flamboyant new production at London’s Alhambra Theatre. Maynard Keynes is in the audience, though he expects little from the evening. Despite Lydia’s many triumphs, including the title role in Stravinsky’s Firebird, Maynard’s mind is made up – he considers her ‘a rotten dancer’. Besides, Lydia has at least one husband in tow and Maynard has only ever loved men. Tonight, however, he is moved by her performance, and when the ballet closes in financial disaster leaving its cast penniless, he invites Lydia to move into his Bloomsbury house.

No strangers to scandalously unconventional liaisons, Maynard’s Bloomsbury friends – Virginia and Leonard Woolf, Vanessa and Clive Bell, Duncan Grant and Lytton Strachey – are intrigued to find the resolutely homosexual Maynard falling for a woman. They assume it is a passing fad. After all, Lydia is a noisy, uneducated chatterbox, while Maynard is a brilliant intellectual whose encylopaedic knowledge and genius for strategy have already made him indispensable to the Treasury. But when Maynard pulls out of a Royal Commission tour to stay close to Lydia, his friends realise they must act. As Virginia writes to her sister Vanessa, everything they value risks ruin from this ‘parokeet’ whose conversation is limited to ‘one shriek, two dances’. Anything other than a brief affair would be ‘a fatal and irreparable mistake’. Maynard must be rescued from himself.

Vividly recreating Lydia’s life-changing journey from Tsarist St Petersburg to Jazz Age London via the Paris of Proust and Picasso, this compelling new novel celebrates a love story that is utterly unexpected, true, and stranger than fiction.

Susan Sellers is Professor of English Literature and Creative Writing at the University of St Andrews. Her first Bloomsbury-inspired novel, Vanessa and Virginia, was an editor’s pick for The New York Times and has been translated into sixteen languages.

“To read Susan Sellers’ wonderfully evocative novel is to be immersed in the cultural milieu of the Ballets Russes and Bloomsbury, informed and entertained in equal measure. Central character Lydia Lopokova is a marvellously sparky creation, maddening and original, who springs to life on the page as she stirs up and provokes Bloomsbury. Firebird is also a love story, charting the utterly unlikely relationship between Lydia and Maynard Keynes. It’s moving, amusing, brilliantly researched and utterly absorbing. A damn good read!”

“Firebird is a sensational love story of two fascinating people - Lydia Lokopova the star of the Russian ballet and John Maynard Keynes the famous economist. Think Natasha Rostova in War and Peace crossed with Emma from One Day. We travel, dazzled, between Imperial St Petersburg, Paris, the US, Madrid, to Bloomsbury, London. Lydia’s enchanting, hilarious conversations (Maynard is her ‘speaking book’, the ‘big walk’ of her life) match her impulsive gestures – climbing inside a hotel refrigerator to keep cool. A woman who likes two steaks placed on top of each other to leave room for potatoes and so full of life you will fall in love with her as quickly as Keynes. Susan Sellers is a true artist capturing scene after scene in such perfect colour that she could be a Bloomsbury painter. I could not put Firebird down!”

"Susan Sellers, Firebird - When the don met the dancer - this is the story of how Maynard Keynes, the great economist, fell for Lydia Lopokova, celebrity ballerina and Russian émigrée. And it is also a story of resistances, when a different kind of woman stepped into the settled world of Virginia, Vanessa, and all the rest of their English entourage. – In Firebird, Susan Sellers restages the bright Bloomsbury years of the early 1920s as they have never been seen before."

For the French edition:

“Susan Sellers traces with finesse the story of this unlikely marriage, which causes sparks to fly in Bloomsbury. Sellers skillfully draws attention to the paradoxes that ignite the Bloomsbury group, champions of liberty, casting them in a new light…. [and] draws on a novelist’s sensibility as well as her scholarly knowledge to explore what is at stake for Bloomsbury. She weaves a canvas that is both rich and convincing, allowing us entry to an iconic place and time. Her lively writing style, her sense of scene, her canny way of moving across time, the wicked evenhandedness with which she describes pettiness without lingering on it: Firebird is impossible to put down.” - Geneviève Simon in Arts Libre:

“Firebird takes us into the secret world of the Bloomsbury Group and history of Russian dance shortly before the shock-waves of the October Revolution. Literary and artistic references abound and the reader learns a great deal, all the while enjoying this X-ray analysis of human emotion and desire. Totally recommended.”

- Stéphane Bret in La Cause Littéraire:

“This whirlwind of a novel, which lifts the curtain on the love affair between star dancer of the Ballets Russes Lydia Lopokova and the famous economist Maynard Keynes (…) is one to slip into your suitcase this summer. (….) Brimming with a wealth of characters, Firebird pays long overdue homage to the star dancer (….) Muse to Diaghilev, partner to Nijinsky, friend of Stravinsky and Picasso who painted her, Lydia has waited a long time for a beautiful novel to shed light on her incredible life." - Claudine Colozzi in Danses avec la plume.