This fascinating novel prompts many unusual questions about the most famous play in the world.

It explores the mind of the quizzical Hamlet himself, and of Shakespeare – if he was indeed, the author.

Can Hamlet be saved from himself and can William Shakespeare be proved to be the author of the play and of others attributed to him?

The novel features a 21st-century Psychotherapist of mixed race, Jacob Fortune, who doesn’t like the age-old classic play – especially its conclusion. Nor does he believe that the name ‘William Shakespeare’ was anything other than a ’commercial marketing ploy’ for the Elizabethan theatre.

In detective style, through virtual reality, he travels back to try to get into the mind of Hamlet, in order to change the narrative of the play and also to prove himself right about the false claim of authorship. Jacob’s story takes us on a light-heated journey through the England of Elizabeth I, but is intertwined with his own experience of love and relationships in the reign of Elizabeth II. He and his colleagues in 4 Psychotherapists for U have troubles of their own, regarding what it means to be male/female/non-binary in their gender identity. The novel has surprising twists and turns along the way.

He is currently Fellow and Senior Dean at Blackfriars Hall, Oxford, and Director of the Future of the Humanities Project with Georgetown University, Washington, DC.

"When a team of 21st Century psychotherapists travel back to Elizabethan London, they treat a melancholy young prince named Hamlet. Will their intervention change the action of the play or even the course of theatrical history? In this witty and imaginative novel, Michael Kerr Scott creates a light-hearted, engaging, and remarkably authentic portrait of Shakespeare’s London where theatre and daily life transform one another in unexpected ways. As they help Hamlet work through his own doubts and hesitations, the therapists discover that Shakespeare’s theatre can illuminate and give meaning to their own lives."
- Professor Michael J Collins, Georgetown University Washington D.C.

"Hamlet and the Psychotherapist combines Michael Scott’s extensive knowledge of Elizabethan England with his passion for Shakespeare's plays.  This unusual story of time travel provides a new take on the mind set of Hamlet, one of Shakespeare’s most intriguing characters.  This is an entertaining flight of fancy.
- Emma Lucia Hands, Director of Drama Studio London
​

“A modern multi-racial psychoanalyst holds the mirror up to Hamlet, but unexpectedly, in his virtual return to the past, what he sees is his own reflection. Hamlet meets Back to the Future in multiple quests for identity. Psychiatrist Jacob Fortune travels back in time through the portal of his mobile consulting room, to straighten Hamlet out and to try to avert the prince's final denouement, but his quest leads him to discover the real, but mysterious William Shakespeare and some of his acquaintances."

“The life of the psychoanalyst gets entangled with a galaxy of fictional Shakespearean characters, historical figures and transhistorical intrigues. In the mirror that Fortune holds up to Hamlet images merge, come into focus and recede under the watchful eye of nonchalant time-traveller "Spikey" the cat. Everything comes to rest in the talent of the artist, and the process is mediated through the virtual consulting room that shuttles the perplexed psychoanalyst and his colleagues at 4 Psychoanalysts 4 U between past and present, all of whom are caught up in fictional analogues of their own personal relationships. A spirited and inventive investigation of the many ways in which art and life interact.”
​- John Drakakis, Emeritus Professor of English at University of Stirling and a well known cultural materialist and Shakespearean critic

Hamlet and the Psychotherapist 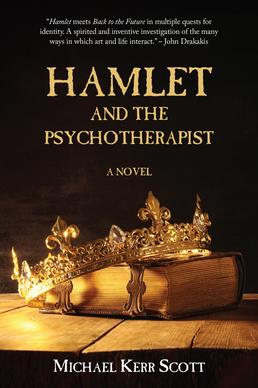