​​This new book is about animals and the role they played in nineteenth-century social reform. More specifically, it is about how popular interests in zoology and changing attitudes toward animals at this time figured in the rhetoric surrounding sanitary debates. But it is also concerned with how literature actively participated in social change as well as with ethical practices in new legislation and changing perspectives on poverty, disease, and crime. Beginning with Charles Dickens’s early sketches and continuing through some of his most famous works, this study examines the evolution of rhetorical strategies through which he, and his contemporaries, sought to elicit sympathy for the poor through manipulating the already precarious boundaries between animals and humans.

The analyses encompass changing perspectives on animal agency in light of the new urban and industrial contexts of nineteenth-century England, representations of zoological study and natural science in popular periodicals and newspapers, the symbolic roles of menageries and zoological gardens, and the rise of humane societies in relation to poverty and disease. Spanning early sketch writing and journalism through to popular serials and novels, this reading considers Dickens and his contemporaries in the context of the sanitary debates of the nineteenth century and traces narrative models through which these authors, reformers, and social scientists articulated and mediated anxieties of poverty and disease.

​Professor Terry Scarborough is on the faculty of the Department of English and Fine Arts at Okanagan College, BC. Canada. 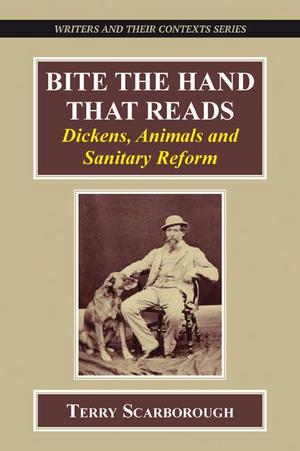 Bite the Hand that Reads: