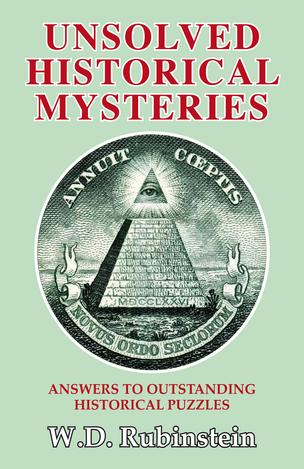 Second edition, with a new Introduction.

We still do not know for certain:

Here, a leading historian asks questions, explores possible answers, and presents a fresh view of these great and unresolved mysteries.

This is a fascinating and objective series of enquiries. The distinguished author evaluates what evidence exists, and the many and varied theories offered on each unsolved but nagging mystery.

The book goes behind the scenes to examine much that remains in the shadows. He enquires about clandestine intrigues, whitewashed evidence, fraudulent claims, and much that many academic historians have previously ignored.

​“A thorough and absorbing review of the evidence surrounding various unsolved popular mysteries. For me, the merchant seaman was Jack the Ripper, Oswald acted alone in the JFK hit, and the Shakespeare work was supplied by several people. But what do you think? Professor Rubinstein’s cogent delivery and copious footnotes almost implore the reader to reach his own conclusions." - Dr Barry R.Clarke, Daily Telegraph enigmatologist."

“a gem of a book…readable and clear.” – Beechcombing, online blog.

“eminently sceptical…disposes of all manner of legends and myths.” – John Stroup, Histories of the Hidden God.