Men of Property
The Very Wealthy in Britain Since The Industrial Revolution.

A new paperback edition of the well-known study by the leading international expert on wealth formation and the wealthy in the 19th and 20th centuries in Britain.

It is the first book by a historian to analyse who were the very rich. Until very recently surprisingly little was known on this beyond anecdotes and stereotypical impressions.

The revelatory study is largely based on a detailed, comprehensive analysis of the probate records of wealth at death, and on income tax and other objective sources. From these has been built up a full picture of the occupations, social origins and career patterns of the very rich in Britain since the early 19th century. The study includes both businessmen and great landowners.

This edition also includes chapters on the wealthy in Britain in the more recent period 1940-80.

This book has been widely credited with helping to shape the new ‘Gentlemanly Capitalism’ school of economic history, and this has greatly influenced modern understandings of economic growth in Britain.

Professor Rubinstein shows that the plurality of the rich in Victorian Britain earned their fortunes in commerce and finance, especially in the City of London, rather than in manufacturing and industry.

The author is Adjunct Professor History, Monash University, Melbourne. He was formerly Professor of History, University of Wales, Aberystwyth. 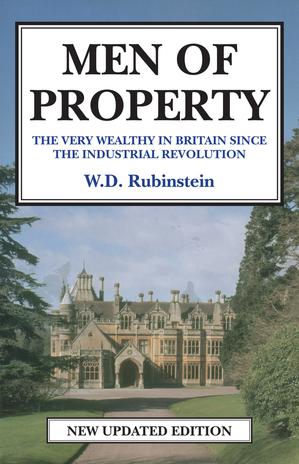