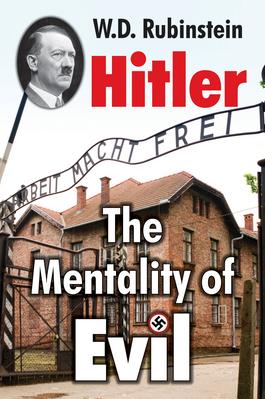 The Mentality of Evil

Adolf Hitler's German Nazi party murdered at least 6 million Jews including women and children, and others considered by his despotic believers to be 'undesirables'.

He also killed millions of others and was responsible for the deaths of up to 50 million people in the Second World War. These were mainly in Russia, but it is generally estimated that about 5.3 million German soldiers died in World War Two, plus about 1 million German civilians, in air raids and so forth.

There have been countless biographies of Hitler, whose regime is almost universally seen as the most evil in modern history.

In this new biography, Professor William Rubinstein - an expert on Jewish history - stresses a number of features of Hitler's mental and ideological world-view, directly affecting his career in crucial ways. These have received little or no attention. They include his invariable habit of thinking in terms of long periods of history, and his aim of building a vast German empire in Europe intended to last for a thousand years, in which the life of an individual was of no importance. Hitler shared this perspective with Communist leaders led by Lenin and Stalin, who also thought in terms of imposed long-term dominance by one social class.

This important new work also examines other much debated questions including whether Hitler, the greatest anti-semite in modern history, had a Jewish grandfather. It presents a clear and cogent account of Hitler's career, and re-assesses previous historical accounts.

​William D. Rubinstein is one of the leading economic and social historians of this generation. He was Professor of History at the University of Aberystwyth between 1995 and 2011, and is now an adjunct professor at Monash University in Melbourne, Australia. He was previously Professor of Social and Economic History at Deakin University in Victoria, Australia. He is a Fellow of the Australian Academy of the Humanities, of the Australian Academy of the Social Sciences, and of the Royal Historical Society.