​Classics in Social and Economic History series, no 14.

Elites and The Wealthy in Modern British History
Essays in Social and Economic History. 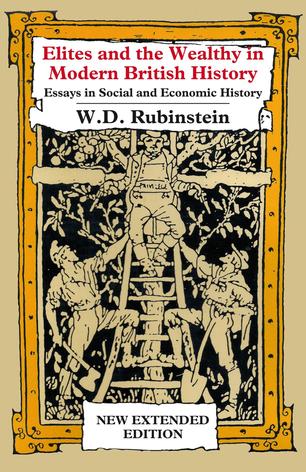 This is a much enlarged edition – with 4 further essays and a new introduction added – of Professor Rubinstein’s influential study of the evolution and composition of Britain’s elites since 1750.

The author is the leading historian who has reshaped our knowledge of the top strata of British society. He shows the key importance of London and of the relative insignificance of the manufacturing and heavy industries of the North of England for Britain’s elite of wealth and power.

He focuses on the development of Britain’s wealth and elite structures since industrialisation. The work is based on intense and original pioneering research into individual wealth-holders and elite members.

The essays include three which discuss ‘survivals’ in modern British history, patterns and movements which historians have overlooked because they ‘shouldn’t be there’.

A substantial new introduction reviews the recent historiography of the subject, and brings up-to-date earlier material.

Contents: New introduction; list of tables; Wealth: The Victorian Middle Classes: Wealth, Occupation and Geography; Wealth, Elites and the Class Structure of Modern Britain; The Geographical Distribution of Middle-class Income in Britain, 1800-1914; Entrepreneurial Effort and Entrepreneurial Success: Peak Wealth-holding in Three Societies, 1850-1939. Elites: New Men of Wealth and the Purchase of Land in Nineteenth-Century Britain; Education and the Social Origins of British Elites, 1880-1970; The Evolution of the British Honours System Since the Mid-Nineteenth Century; Survivals: The End of ‘Old Corruption’ in Britain, 1780-1860; Charles Dickens, R. Austin Freeman and the Spirit of London; British Radicalism and the ‘Dark Side’ of Populism.

Additional essays: The Social Origins and Career Patterns of Oxford and Cambridge Matriculants, 1840- 1900; The Size and Distribution of the English Middle Classes in 1860; Businessmen Into Landowners: The Question Revisited; The Secret of Leopold Amery.

The author is Adjunct Professor History, Monash University, Melbourne. He was formerly Professor of History, University of Wales, Aberystwyth.

"an impressive study of the wealthy in Britain since the industrial revolution...stimulating and path-breaking" Derek Aldcroft, Victorian Studies.

"..a clear and definitive profile of the rich who died in the United Kingdom between 1809 and 1979 and a fine example of how large projects should be summarized." Peter Lindert, The Journal of Economic History,