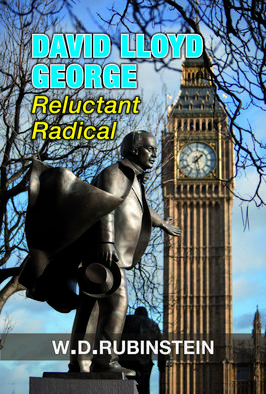 The 'Welsh Wizard', David Lloyd George (1863-1945) - The 'Man Who Won the War' - was Chancellor of the Exchequer from 1908-1915 and Prime Minister from 1915 until 1922. His many innovations changed Britain, its social relations, its international relations, and its expectations. Yet his key beliefs, his ambitions, and his inter-war career all remain perplexing. He was unfulfilled in critical respects, yet always a dynamic force.

He remains one of the most famous British political leaders of modern times. As Chancellor he introduced many of the early features of the Welfare State including old age pensions, labour exchanges and unemployment insurance. As Prime Minister he won the First World War. He expanded the British Empire to its maximum extent. But he is also, in many respects, a great enigma. Seen as a consistent radical, he was never a socialist and was an opponent of the Labour Party, and of communism. Seen as a Welsh radical nationalist, he was a British Empire and wartime patriot and champion. Seen as the "scourge of the Dukes," his government sold peerages and titles to nouveau-riches businessmen on a grand scale. Although widely seen as a product of the working class, his father was a schoolteacher and he was a successful solicitor during his early career.

In this new work, Professor Rubinstein sheds new light on a great British leader whose career is surprisingly opaque.

​​William D. Rubinstein is one of the leading economic and social historians of this generation. He was Professor of History at the University of Aberystwyth between 1995 and 2011, and is now an adjunct professor at Monash University in Melbourne, Australia. He was previously Professor of Social and Economic History at Deakin University in Victoria, Australia. He is a Fellow of the Australian Academy of the Humanities, of the Australian Academy of the Social Sciences, and of the Royal Historical Society.