Writers & Their Contexts series, no.3 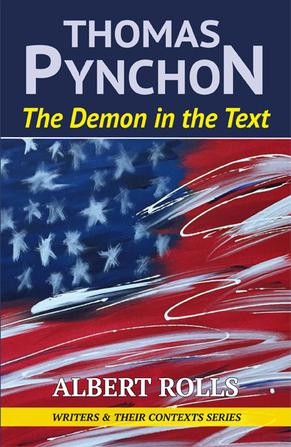 This is a significant new and accessible work on the leading modern American novelist whose works – notably Gravity's Rainbow, which won the 1974 U.S. National Book Award for Fiction – remain mysterious to many, just as his life remains reclusive.

Pynchon’s fiction and non-fiction writings encompass a vast array of subject matter, genres and themes. His most recent novel is Bleeding Edge, published in September 2013.

The material Rolls uses to present his argument is often marginal and includes the available letters, many of which can be found in libraries; juvenalia, that which Pynchon wrote for his high-school newspaper as well as the unfinished “Minstrel Island”; the essay “Hallowe’en? Over Already?”; newspaper and magazine articles; book trailers and other promotional material; Paul Thomas Anderson’s adaptation of Inherent Vice ; television shows, The Simpsons and The John Larroquette Show in particular; and the published non-fiction and fiction.

Rolls analyzes this material to produce a reading of Pynchon that teases out the importance of the relationship among the public figure Thomas Pynchon, the private individual Tom Pynchon (who, Rolls demonstrates, resides in the text as a sort of Maxwell-Demon-like entity), and those who read Pynchon and sometimes attempt to learn about his life. The result is a study of Pynchon as an idea rather than a life of Pynchon, although biographical details are discussed when they need to be, particularly in endnotes that often serve as essays themselves.

Contents: Acknowledgements. Note on the text. Fictional Autobiographies and Autobiographical Fictions. A Dual Man (and Oeuvre), Aimed Two Ways At Once: The Two Directions of Pynchon’s Life and Thought. Considering the Enclave. Epilogue. Endnotes. Bibliography. Index.

Albert Rolls earned his doctorate at the National University of Ireland, Galway and has published on numerous subjects: William Shakespeare, John Donne, Alexander Pope, Charlotte Lennox, and Thomas Pynchon among others. He has taught at a variety of CUNY campuses, as well as at other colleges, and worked as an editor at various publishing companies, including serving as editor-in-chief at AMS Press, Inc.

“A bold and ingenious undertaking. Around the necessarily slender armature of as-yet available biographical faces about the actual Pynchon, Rolls constructs a provocative three-dimensional representation of the virtual author or literary persona – as speculative hologram starting from what we know, analysing what we read, inferring what we can understand about the fiction in the light of the life and, subtly, vice versa. Dubini brothers, move over: this is a journey into the mind of Pynchon.”

“Albert Rolls has summoned a lively, worldly and informative account of Pynchon’s career from out of the fog of hearsay and legend. Mining ephemera, rare documents and the fiction itself, Rolls assembles something many thought impossible: a coherent and credible account of the writer’s career. Reading Rolls’ book is like that moment when Dr. Watson spies a silhouette on the moor – suspecting a culprit, the reader soon recognizes the detective at work, solving a mystery.”

Thomas Pynchon
The Demon in the Text