The Man and The Writer

Writers and Their Contexts series, No. 6 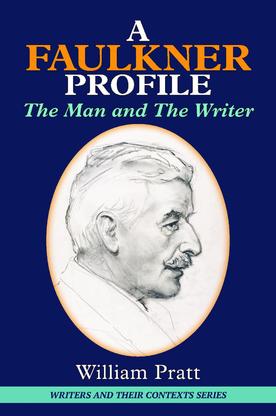 This major new work by a distinguished scholar is the result of a life-time’s fascination with Faulkner, whom the author met. His reflections on these meetings are a unique insight into the mind of a man who was notorious for his wish for privacy. So, too, is his analysis of the works of the great novelist and Nobel Prize winner.

As Professor Pratt writes: “In New Orleans in the early 1920s, when William Faulkner and Roark Bradford were young writers trying to make their mark in the world, Faulkner told his friend, ‘I hope to be the only unregimented and unrecorded individual left in the world.’   It was his ambition to be forgotten as a man and to live only in his work.   He held to that ambition for a long time, evading publicity and giving misleading answers to interviewers who sought him out, but fame caught up with him eventually, and forced him to acknowledge that readers interested in his work would naturally want to know more about the author.  He might prefer anonymity, but he could not escape fame.  For years he struggled to earn a living as a writer, and only when his books began to sell did he realize that his originality as a writer would lead readers to seek the source of it, to be curious about the personality of the man who possessed such an astonishing command of words. “

This new work by Professor Pratt supplies much important new material to offset Faulkner’s reticence, alongside his eloquence as a writer.   From the start, Faulkner cultivated a style that was elusive and difficult, consciously original in technique and intellectually challenging, choosing his words carefully in ways that were baffling to many readers. Yet he succeeded to an astonishing degree in appealing to a wider and wider circle of readers. He did so by becoming a major participant in the movement that dominated twentieth century literature - the Age of Modernism.

In literature, Modernism was chiefly the creation of three major poets and three major novelists: Yeats, Pound, and Eliot, and the novelists Joyce, Hemingway, and Faulkner.  Together, they fashioned a new literary style out of a variety of personal styles.  Through collaborating or interacting with each other they produced, in the first half of the twentieth century, a series of masterpieces in poetry and fiction.  Hemingway and Faulkner were the youngest and last to acquire a world audience.  What they learned from the older Modernists was how to intrigue, mystify, and induce readers to enter into a poem or story so deeply that they would experience what the French Symbolist poet Stéphane Mallarmé had earlier called “the delicious joy of believing he is creating” the very work he is reading.

To know Faulkner the man is as challenging as to understand Faulkner the writer, but his two identities were linked, though most of those who knew him well are no longer with us.  Professor Pratt was not in his circle of intimate friends and family, but he did get to know some of them. He met Faulkner in Oxford, Mississippi, his home town, by the good luck of having a family connection. He tells detailed stories of meeting Faulkner.

He writes: “My first real encounter with Faulkner taught me something important, that the author and the man are never exactly the same, that the imagined voice of a writer can be quite different from his actual voice as a man.   The difference between Faulkner the man and Faulkner the writer were obvious as soon as I met him. Though he was formidable as a writer, as a man he was deceptively shy.”

The works and personality of the great novelist are much illuminated by this remarkable book.

William Pratt is Professor of English Emeritus at Miami University in Oxford, Ohio, and author or editor of twenty books in the field of modern literature, including The Imagist Poem:  Modern Poetry in Miniature; The Fugitive Poets: Modern Southern Poetry in Perspective; Singing the Chaos: Madness and Wisdom in Modern Poetry; and Ezra Pound and the Making of Modernism. From 1991-2005 he served as Secretary of the Ezra Pound International Conference, and in 2015-16 he was President of the Literary Club of Cincinnati, founded in 1849, the oldest literary club in the USA,.