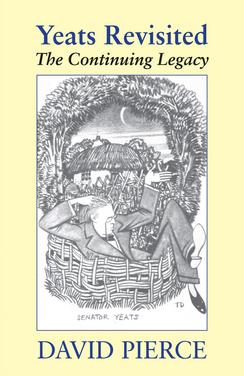 This new book by the seasoned and internationally acclaimed critic, David Pierce, provides further evidence that William Butler Yeats is still our contemporary but still in need of the critic. From a position which is at once inside and outside history, Yeats manages to hold our attention still. He continues to intrigue critics and readers alike. Lines from his poems are regularly quoted to clinch a viewpoint or judgement on the age we live in.

This study constitutes an authoritative, handy, readable, and up-to-date guide both for students and the general reader.

In the middle of the Irish Civil War, with warring participants around his tower-house at Ballylee on the Clare-Galway border, Yeats wrote that ‘We are closed in, and the key is turned’ and we pause with him. But then he adds on the following line ‘On our uncertainty’.

David Pierce provides a history of Yeats criticism with brief annotations of books and essays from 1915 to 2020. In 1915 the prescient Joseph Hone rightly noticed that Yeats was a writer who crossed bridges but left them behind intact for others to discern. Ever since, critics have returned with interest to all the bridges Yeats crossed to give us a more complete picture of the poet who never stood still.

The book also includes a chronology of Yeats’s life and times.  One essay is devoted to a detailed consideration of ‘Among School Children’, a poem which has exercised critics for the best part of a century. Underlying Pierce’s account is a concern with the terrain between what is inside and what is outside the poem. Among the topics dealt with are: the dialogue with his wife, his view of education and the Montessori method, the image of the dance, and his reading in philosophy (A. N. Whitehead), religion (St. Teresa of Avila), and politics (Gentile).

The work also explores the lively debate on Yeats and Modernism, and what we can learn from it. Special attention is given to dates, origins, and characteristics, and how Yeats has reshaped our understanding of Modernism.