This new book by the eminent critic provides an informative and timely survey of contemporary approaches to Joyce and modern Irish writing over almost 40 years.

In a fresh opening survey Pierce explores the new departure for fiction heralded by A Portrait of the Artist as a Young Man, and this is followed by essays on the hybrid landscape in Ulysses and on the distinctive style and humour of the ‘Eumaeus’ episode. Other pieces focus on the appeal of Irish short-story writer, Benedict Kiely, anthologies of Irish writing, and Irish writing in the years 2006-9.

The second half of The Joyce Country is devoted to twenty-six reviews of books about Joyce written from the 1980s to the present and grouped under several headings including ‘Joyce’s European Cities’, ‘Joyce, Yeats and the Matter of Ireland’, ‘Ulysses in Perspective’, and ‘Joyce and Modernism’.

Contents. Introduction; A New Departure for Fiction: A Portrait of the Artist as a Young Man; The Hybrid Landscape in Joyce; Preparatory to Anything Else: The Opening to ‘Eumaeus’; Benedict Kiely Tribute; Anthologies of Irish Writing; History in the Making: Irish Writing in 2007; Joyce's European Cities; Joyce, Yeats and the Matter of Ireland; Joyce and Modernism; Ulysses in Perspective; On Collections of Essays; On a Personal Note; Select Bibliography; Index.

Professor David Pierce taught at York St John University. He is an internationally noted author, and this is his twelfth book. He has been publishing since 1979. The main focus of his work is Joyce, Yeats and the history of modern Irish writing. His books include the anthology, Irish Writing in the Twentieth Century (2000), his highly-regarded memoir, The Long Apprenticeship (2012), and three books with Yale University Press:James Joyce’s Ireland (1992), Yeats’s Worlds (1995), and Light, Freedom and Song (2005).​

"Open the book to just about any page, and you will find something new or noteworthy…. Generous as well - and this, in my experience, counts as a signature of Pierce’s work overall - is the spirit running throughout: capacious, affectionate, friendly, familiar, personable, and, well, nice…. Also, he is an excellent close reader of, I think, exceptionally good judgment."   - John Gordon, The James Joyce Literary Supplement

Pierce's New Reading contributes a re-newed reading, both for its restoration of perspectives from the decades of Joyce's upbringing, education, and writing and for its illumination of Joyce in constellation with a number of Victorian writers. Redrawing such connections, this book succeeds on several levels, calling to mind ideas and influences of A Portrait that have not always found their way into the critical conversation….Its chapters bear the stamp of a thoughtful teacher and delighted reader intent on sharing his well of scholarly knowledge and pedagogical experience. - Greg Winston, James Joyce Quarterly January 2020

"For anyone who met Pierce’s writings in their original publications, a few pieces in this book offer a pleasant stroll down memory lane, but most are an alarming reminder of how much we missed at the time, or have forgotten, or only half-remember. For others who arrived too late on the scene, this is a valuable survey of the changing shape of Joycean critical and biographical concerns since the 1980s. It is good to be able to wave this book in the air, and to urge my customers to read it" -. John Wyse Jackson, James Joyce Broadsheet June 2018

"David Pierce has devoted much of his life to Joyce and twentieth-century Irish literature more generally, and in The Joyce Country: Literary scholarship and Irish culture, he has helpfully collected the best of his essays, lectures and reviews in a single volume. The book is an engaging and idiosyncratic blend of Pierce’s own academic literary criticism and his reviews of other Joyce scholars’ works, with his immense Joycean knowledge worn lightly but effectively. Quoting Bernard Benstock’s perhaps tongue-in-cheek assertion from 1972 that “Ulysses is no more about Dublin than Moby-Dick is about a whale”, he reminds us, for example, that while Joyce’s worldwide fame has never been greater, as recently as twenty-five years ago his Irishness “stood in danger of being diminished or passed over in favour of a world writer whose country of origin was of secondary significance”. - Gerri Kimber, Times Literary Supplement.

“In The Joyce Country, David Pierce brings to bear his deep-seated knowledge of the workings of the novel on Joyce’s works. His illuminating, graceful, and original interpretations of Joyce’s texts and of recent Joycean criticism underscore the importance of attentive reading. To peruse this book is at once to be schooled in how to analyse Joyce’s texts, to be prompted to revisit them in fresh and challenging ways, and to be persuaded anew of their abiding importance.”- Anne Fogarty, Professor of James Joyce Studies, University College Dublin.

“David Pierce’s latest collection represents a new approach to scholarly stock-taking. It is a wonderfully reflexive, discursive, and deeply informative book which will delight scholars of Joyce and modern Irish writing. A tour de force offering a handy access to Pierce’s influential criticism.” -  Jolanta Wawrzycka, Professor of English at Radford University, Virginia and Trustee of the James Joyce Foundation. 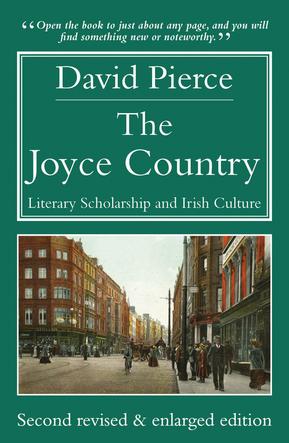