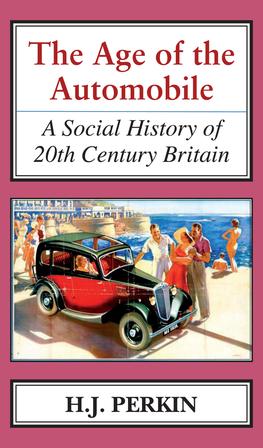 This is a social history of modern Britain at its most focussed, on issues that really matter.

This lively work offers a wide-ranging account of the social history of the motorised age, and of the machine which has reshaped the character and development of the modern world.

It places the development of the car (and of its more sinister cousins the tank and the war plane) in their context and impact on society in peace and war from the Edwardian period onwards.

The author shows that automobiles in particular represented a modernity which promised to the individual power over time, space, and their own personal machine.

They were emblems, too, of sex appeal, and of the new consumerism. They were prismatic of modern society itself, and a futuristic key to its social history. And as they came down in price over time they opened up the world anew to the middle and then the working class.

​Harold Perkin was Professor of Social History, University of Lancaster, being the first such Professor appointed in Britain.

​​“The book’s greatest merit is the way in which it increases our awareness of events and their consequences… This is essential reading.”  -

The Age of the Automobile