Behind The Scenes: Publishing About Dickens in Hard Times

The Culture and Politics of Academic Publishing

This revelatory and often startling book is the most unusual insider-story about book publishing ever issued.

It pivots on the enormous changes in publishing, its culture and politics over four tumultuous decades since the 1970s.

The book does so in providing a detailed blow-by-blow account of the author’s struggles over the eventual publication of his classic and magisterial work Charles Dickens and His Publishers. This was originally issued in 1978 - and reissued in a second revised edition by Oxford University Press in 2017.
“Behind The Scenes” is an essential ‘read’ for every author faced with the complexities of the modern publishing world.

It deals with the many distinct components: authorship, illustration, bibliography, printing, cultural formations, circulation, readership, and use. Valuably, too, it is about the many challenges to overcome.

Robert Patten shows what has recently happened to scholarly publishing, as instanced by his book with OUP. He analyses how the process of soliciting, editing, publishing, and selling one retail title was and is conducted (and how changes have happened since the 1970s); who initiates and formulates a project, and how; under what cultural regimes—legal, commercial, academic. He asks what combination of agencies [persons, machinery, distribution systems] enables a book to be manufactured, marketed and sold in the various ways in which books reach the marketplace today. It is a key work in communications history.

Robert L. Patten is one of the best-known scholars of Charles Dickens, and of English Literature. His classic Charles Dickens and His Publishers was reissued in a second revised edition by Oxford University Press in 2017.  He is a Senior Research Fellow at the Institute of English Studies, School of Advanced Study, University of London. He has chaired the Victorian Division of the Modern Languages Association, and served as President of the international Society for the History of Authorship, Reading & Publishing. He has held Fulbright, Guggenheim, and National Endowment for the Humanities Fellowships.

"Bob Patten has written classic books about publishing from the outside: this will be hailed as a classic about publishing on the inside. The chronicle of frustration, and eventual achievement, is as gripping as a good novel." - Professor John Sutherland. 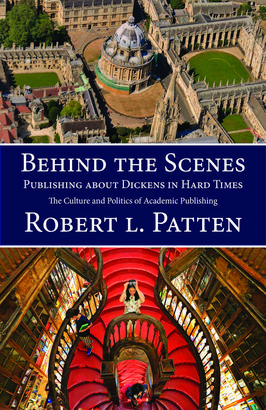