This book is a significant contribution to the study of audiences, of reception, of the formatting, pricing, advertising and promotion of new fiction, and of how writers were enabled to reach readers. Professor Nesta provides the facts and questions the myths about the publishing and the promotion of fiction. He draws together wide and detailed knowledge and examines the contextual changes which amplify our understandings of the greatest era of new fiction.

Political and legal changes had an enormous impact on publishing. These included the ‘Taxes on Knowledge’, as Edward Bulwer-Lytton called them in 1832. However, publishers knew how to reach the audiences, and to survive commercially. Notably, too ‘puffing’, or the placement of laudatory paragraphs or references to new publications in newspapers, did not count as taxable advertising and was widely practised, particularly by British book publishers who also published their own magazines.

Sheridan, in The Critic (1779), had introduced Mr. Puff, a ‘practitioner in panegyric’ who subdivides the art into the ‘puff direct, the puff preliminary, the puff collateral, the puff collusive, and the puff oblique, or puff by implication.’ The practice of being generous with the numbering of editions was another common practice. Professor Nesta details many tales of these angles in marketing.

Key contextual shifts were the Education Act of 1870, the innovations of steam presses, cheap paper, lithography, and penny newspapers, a modern postal system, gaslight, electric light, and improved communications with the coming of the telegraph and telephone. All had an impact on reading, on distribution, and on marketing. Railways made the transportation of newspapers, booksellers’ catalogues and books cheap and efficient.

The complementary development of modern publishing and a mass market for its products, replaced the previously limited market that existed because of high prices, the exclusivity of the circulating subscription libraries, and a smaller, elite audience.

Of new books there was no end. In 1892, novelist George Gissing – author of New Grub Street  -- asked ‘Who in heaven's name buys all the books that come forth? This is an endless mystery. Day by day new publishing firms appear, & the weekly issue of books is appalling. There must be thousands of people who are accumulating huge libraries, -- yet I don't know one of them.’  This landmark new book opens our eyes.​

Dr Frederick Nesta is Associate Professor in UCL Qatar’s MA in Library and Information Studies. His career before joining UCL included supervisory positions at major research libraries, including New York Public Library and Columbia University, experience in corporate and special libraries, and directorships at academic libraries in New York, London, and Hong Kong. From 2004 to 2011 he was University Librarian at Lingnan University in Hong Kong. His research interests include the history, economics and marketing of late Victorian books; the history and culture of the book in China; and the interactions between people and digital and printed texts. His earlier book in this series George Gissing, Grub Street, ​and The Transformation of British Publishing was published in 2020.

Writers and Their Contexts series 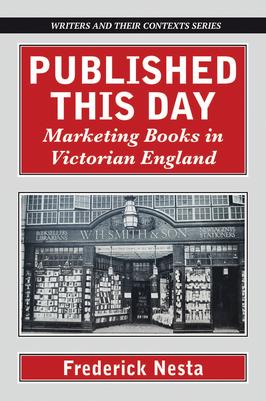