There are histories of major publishing houses and biographies of major authors, but this is the only work that uses the publishing career of a respected and professional ‘mid-list’ author as a case study of this period of great change.

George Gissing (1857-1903), author of a series of important novels, is best known for New Grub Street (1891), which concerns itself with the plight of an author of much talent but little success. It is a critically esteemed picture of publishing and the world of books at a time of dramatic transformations.

Professor Nesta’s new work examines that “commerce”: the production, distribution, and economics of literature, and, perhaps most importantly from a human standpoint, the financial rewards of literature to the people who produced it, in relation to the life of one late Victorian author. His study will be of value to book historians, literary scholars interested in the Victorian period, those concerned with the historical economics of publishing, copyright, literary agents, advertising, Victorian serials, and circulating libraries.

“The facts connected with the production and distribution of books, though little heeded by the public are, nevertheless, of great social and political, as well as literary importance.” So wrote John Chapman in the April 1852 Westminster Review article entitled ‘The Commerce of Literature’.

The period from 1880 to 1900 saw tremendous changes in British publishing. When Dickens died in 1870 and when Gissing published his first novel in 1880 publishing was still following a set model of publishing three-volume novels for circulating libraries. There was then little or no use of literary agents, no American copyright protection for British authors, and the ‘norm’ for authors was outright sale of copyright instead of advances against royalties. By the time Gissing died in 1903 the basics of modern publishing were in place: international copyright agreements, complex contracts with foreign rights stipulated, the rise of literary agents, the death of the three-volume novel, the end of the dominance of circulating libraries, the use of typewriters and telephones and telegraph, and the growth of a larger reading public.

Dr Frederick Nesta is Associate Professor in UCL Qatar’s MA in Library and Information Studies. His career before joining UCL included supervisory positions at major research libraries, including New York Public Library and Columbia University, experience in corporate and special libraries, and directorships at academic libraries in New York, London, and Hong Kong. From 2004 to 2011 he was University Librarian at Lingnan University in Hong Kong. His research interests include the history, economics and marketing of late Victorian books; the history and culture of the book in China; and the interactions between people and digital and printed texts.

"Nesta's book does a brilliant job...
"Without doubt the study is informative, enlightening and thought-provoking in many sections, with well-researched historical contexts...
"It will contribute invaluably to late-Victorian print culture scholarship and promises to be a precious resource for book historians." - Dr. Rebecca Hutcheon, Lancaster University, The Gissing Journal.

​Writers and Their Contexts series, no. 12.

George Gissing, Grub Street,
​and The Transformation of British Publishing 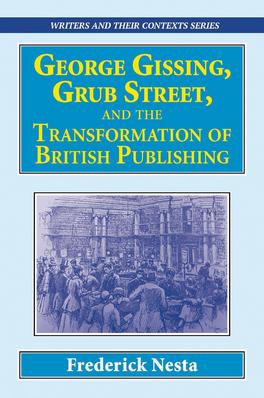