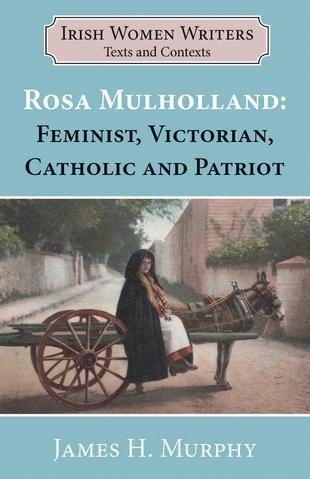 This new work sets six important texts (two full texts and four novel extracts) in the context of Rosa Mulholland’s writing career, and the cultural context of the time. Mullholland’s writing reflects a creative tension between issues of class, gender, religion, land politics, the presentation of the Irish peasantry, Irishness and Victorianism.

Rosa Mulholland was an important figure in late nineteenth-century Irish fiction writing. She was the author of dozens of novels, short stories and critical pieces.

She came from a Catholic, upper middle class family, married a prominent historian and through her sister was related to the Russell family. Their most prominent members were Matthew Russell JS, editor of the Irish Monthly, and Lord Russell of Killowen, Lord Chief Justice of England.

The book is organised in such a way as to give a representative selection of Mulholland’s writings in terms of genre (short story, novel extract, essay), theme (famine; middle-class women’s aspirations; religion; feminism and the land war; women and ethical decision making; gender and economics; publishing and patriotism) and chronology (1864 to 1908).

Interest in Mulholland has been greatly aided by the recovery in feminist literary criticism. She is now regarded as an important figure and this work provides an introductory access to her work to students and scholars.

James H. Murphy has been professor of English at DePaul University, Chicago, and at Boston College. He is a scholar of nineteenth-century Ireland. He is the author of six monographs and editor or co-editor of ten works including The Oxford History of the Irish Book, iv, 1800-1891 (2011). His principal areas of research are the political history and the history of fiction of the century. He has published three monographs over the past decade, Irish Novelists and the Victorian Age (2011), Ireland’s Czar: Gladstonian Government and the Lord Lieutenancies of the Red Earl Spencer, 1868-1886 (2014) and The Politics of Dublin Corporation, 1840-1900: From Reform to Expansion (2020).

​‘Rosa Mulholland was one of the most prominent authors of her day, both popular and pioneering. Her work provides perspectives on late nineteenth-century Irish history and politics, but it is also highly relevant for critical studies of, for example, genre development, feminism and eco-criticism. James H. Murphy’s excellent introduction and the well-chosen selections will engage new generations of readers and scholars’. - Heidi Hansson, author of Emily Lawless 1845-1913: Writing the Interspace and editor of New Contexts: Re-Framing Nineteenth-Century Women’s Prose.