The great historian D.C. Moore’s masterpiece, long unavailable. It is an essential fulcrum for all attempts to explain the nature of the 19th century English political system, and the great and continuous changes that occurred within that system as a preface to modern English society.

Moore shows that the principal factors which changed the Victorian political system were those that derived from its working in the context of the changing economic and social environment in the industrial revolution and its immediate aftermath.

The book reflects the premise that the key to the nature of any political system lies in the relationship between the formal political structure and the structure of the effective groups within that society.

The author was Professor of History, University of California, Los Angeles, and an Associate at the Center for European Studies, Harvard University.

“He challenged commonly held views concerning the Reform Act of 1832, especially the belief that the measure undermined the landed interest’s political ascendancy. He was the first scholar to make systematic use of pollbooks…refusing both the class model and the individual voter model of electoral behaviour…thus the Great Reform Act was, as he put it, a ‘cure’ for a perceived erosion of control by the landed interest rather than a ‘concession’ to middle-class demands.

“Cresap developed these revisionist points most fully in his magnum opus, The Politics of Deference. Here he deployed a greater range of evidence and extended the argument to the Second Reform Act of 1867…he had launched an extraordinarily fruitful debate and permanently transformed scholarly thinking about the 19th-century British political system. – Professor Anthony Brundage, California State Polytechnic University.


“Moore is a very learned man. He is a master of the poll books in which the votes of the enfranchised were recorded between the first and second Reform Acts. He draws from these poll books many valuable conclusions.” – A .J. P. Taylor, New York Review of Books. 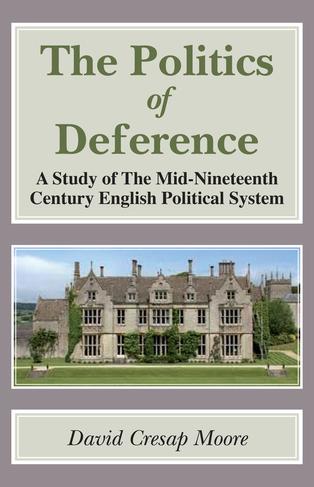 The Politics of Deference

A Study of the Mid-Nineteenth Century British Political System.