George Moore’s fierce polemic against the literary and social censorship of the Victorian select circulating libraries was a landmark in the history of English novel publishing.

Moore wrote this broadside, and Henry Vizetelly published it, in 1885 – both of them incensed at the arbitrary moral restrictions placed on the circulation of literature by Mudie’s select circulating library and by W.H. Smiths, which had both refused to stock Moore’s novels, A Modern Lover and A Mummer’s Wife. The significance of Moore’s tract gives it a sustained cultural relevance.

Professor Coustillas presents it here with the full correspondence it aroused on first publication. This is critically assessed, and its ready availability again will prove it a valuable document for Victorian studies.

George Augustus Moore (1852 – 1933) was an Irish novelist, short-story writer, poet, art critic, memoirist and dramatist. Moore came from a Roman Catholic landed family in County Mayo. He originally wanted to be a painter, and studied art in Paris during the 1870s. There, he befriended many of the leading French artists and writers of the day.

As a naturalistic writer, he was amongst the first English-language authors to absorb the lessons of the French realists, and was particularly influenced by the works of Émile Zola.

Pierre Coustillas was formerly Director of the Centre for Victorian Studies University of Lille. 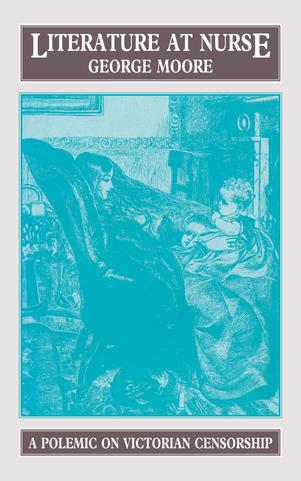 A Polemic on Victorian Censorship.

Edited and with an introduction by Pierre Coustillas​