Or a Tale of the Twenty-Second Century

Edited with notes by Nickianne Moody and Andy Sawyer 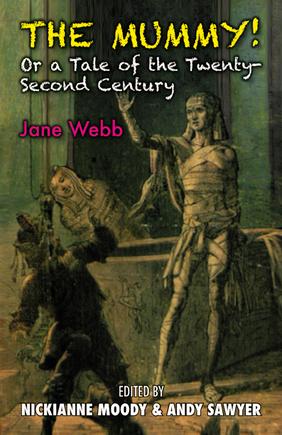 This famous, strange, wild novel was first issued anonymously by the ‘Prince of Puffers’, the fashionable publisher Henry Colburn, as a three-volume novel in 1827. This new scholarly edition places it in its previous and contemporary contexts. It concerns the Egyptian mummy of Cheops, who is brought back to life in the year 2126. The novel describes a future filled with advanced technology and features one of the earliest known examples of a "Mummy's curse. It attempted to predict the state of improvement to which this country might possibly arrive.

Jane Loudon (c.1807-1858) was a definite product of the changing ideas about women’s involvement in education, literature and the arts.  She was interested in science for the whole of her life and participated in journalism and popular science writing. She is best known for promoting women’s practical involvement in horticulture.

The Mummy!: or a Tale of the Twenty-Second Century was published when she was twenty.  It was reviewed favourably by a society which connected ancient Egypt with spectacle, antiquarian interest and as an example of a stable civilisation.  Loudon’s imagination of the future explores changes in society, technology and gendered experience which are significant to understand the culture of the period, the development of women’s writing and the origins of science and speculative writing.

This edition contextualises the narrative in relation to social change and reform in the early part of the 19th-century.  It considers new research on Loudon’s life and career and it examines the relationship between this text and other early science and fantastic writing which emerge into distinct genres during this period.

Loudon may have drawn inspiration from the general fashion for anything Pharaonic, inspired by French researches during the Napoleonic invasion of Egypt. There was also the 1821 public unwrappings of Egyptian mummies in a theatre near Piccadilly, which she may have attended as a girl. She also very likely read the 1818 novel by Mary Shelley, Frankenstein. Loudon deals in greater clarity with elements from the earlier book: the loathing for the much-desired object, the immediate arrest for crime and attempt to lie one's way out of it. Loudon’s ‘Mummy’ gives shrewd advice on politics and life to those who befriend him.