This new book provides a significant introduction and critical survey of the diverse works of Kate O'Brien (1897 - 1974) the Irish novelist, playwright, film-script writer, short-story writer, journalist and biographer. Her novels in particular promoted gender equality and a greater understanding of gender diversity.

This study introduces students to Kate O’Brien as an artist and an activist woman in the world.  It studies her normative and non-normative representations of sexualities and affects, typically embodied in a young woman who happens to fall as a clog into the crushing social machine. The book offers a discussion of her work’s political contents and effects, including her leftist commitments and issues of censorship.

Aintzane Legarreta Mentxaka’s theoretical lenses include feminist, queer, postcolonial, and anti-authoritarian analysis, as well as the critical assessment of criticism originating in them.

Different generations and historical moments have elicited various readings from Kate O’Brien’s lusciously rich and demandingly ambiguous legacy. Once she was a specimen in the bestiary of Irish contrarians, later a tall sharp pike brandished by feminist academics, then a pied-a-terre for Catholic Ireland’s postcolonial scouts, and later still a caped crusader for queer dissidents. Kate O’Brien’s lively critical afterlife is still missing something: a thorough analysis of her aesthetics, now distinctive, now consonant with those of her peers. This book reviews salient critical concerns, places mortar in the gaps, and suggests some possible extensions in the work-in-progress that is a full assessment of Kate O’Brien.

Kathleen Mary Louise "Kate" O'Brien was born in Limerick City. She graduated in English and French from the newly established University College, Dublin. She moved to London, where she worked as a teacher. In 1922–23, she worked as a governess in the Basque Country, in the north of Spain, where she began to write fiction. After the success of her play Distinguished Villa in 1926, she took to full-time writing. She was awarded both the 1931 James Tait Black Prize and the Hawthornden Prize for her debut novel Without My Cloak. She is best known for her 1934 novel The Ante-Room, her 1941 novel The Land of Spices, and the 1946 novel That Lady.

Many of her books deal with issues of female agency and sexuality in ways that were new and radical at the time. Her 1936 novel, Mary Lavelle, was banned in Ireland and Spain, while The Land of Spices was banned in Ireland upon publication Throughout her life, O'Brien felt a special affinity with Spain. Her experiences in the Basque Country inspired Mary Lavelle. She also wrote a life of the Spanish mystic Teresa of Avila, and she used the relationship between the Spanish king Philip II and Maria de Mendoza for her anti-fascist novel That Lady.

O'Brien wrote a political travelogue, Farewell Spain, to gather support for the leftist cause in the Spanish Civil War.

Aintzane Legarreta Mentxaka is a lecturer at American College  Dublin. She has published widely in the areas of modernism, Irish Studies, popular culture, and drama studies. She is the author of the monographs The Postcolonial Traveller: Kate O’Brien and the Basques (2016), and Kate O’Brien and the Fiction of Identity (2011). Mentxaka is a former ‘Government of Ireland’ post-doctoral fellow with the National University of Ireland, and twice fellow with the Irish Research Council. She completed her PhD in University College Dublin. Mentxaka has also worked as a lecturer at University College Dublin, at Saint Patrick’s College in Dublin City University, and as educator at the Irish Museum of Modern Art. 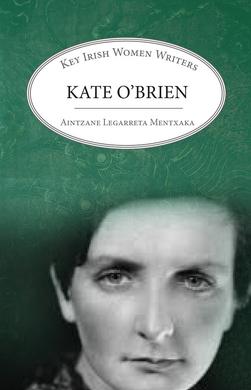