The Hidden Life of a Great Historian

A Personal Memoir by Neil McKendrick 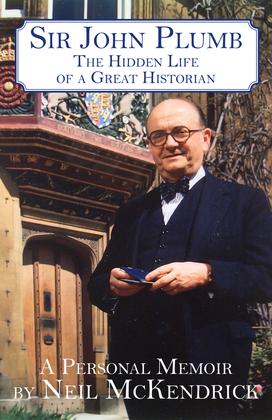 Sir John (Jack) Harold Plumb (1911 – 2001) was a great British historian. He led an extraordinary life of startling contrasts, much of it cloaked in secrecy.  This memoir attempts to lift that cloak

This is a very personal account written by Neil McKendrick, a fellow historian, a fellow Master of a Cambridge college and one his oldest and closest friends, who knew Plumb from his early days to his dying hours some fifty years after they first met.

This new memoir depicts a startlingly revelatory portrait of a complex and controversial man who moved from poverty to great affluence; from beginning his life in a two-up two-down terrace house in Leicester to end it in what was called “Jack's Palace” surrounded by a world-class collection of Vincennes and Sèvres.

Plumb’s personality was sufficiently beguiling to attract the attention of four significant novelists who left six vivid if unflattering fictional versions of him – depicting him as a ruthless charmer, a serial bisexual philanderer and, most bizarrely of all, as a murderer planning a further murder. In truth the real man needed no fictional elaboration to make him unusually interesting. In fact his life is often astonishing. The historian, who achieved such international eminence that, on the direct order of the US President and after a unanimous vote in Congress, the Union flag was flown over the American Congress on his 80th birthday to do honour to the historian who had taught the American people so much, was no run of the mill academic.

In addition to his academic work, during the Second World War Plumb worked in the code-breaking department of the Foreign Office at Bletchley Park, Hut 8 & Hut 4; later Block B. He headed a section working on a German Naval hand cipher, Reservehandverfahren. He became Professor of Modern English History at Cambridge in 1966, serving as Master of Christ's College from 1978-82, when he was knighted in 1982. His pupils included Simon Schama, Roy Porter, Niall Ferguson and Quentin Skinner.

Plumb had moved from drinking beer in down-market pubs in his youth to drinking champagne in aristocratic drawing rooms and owning the finest collection of claret in Cambridge; from a passionate socialist for most of his life (with, at one time, strong Communist sympathies) to a passionate Thatcherite in his 70s; from his provincial working class family in Leicester to become a close friend of the Rothschilds and a companion of the Queen’s sister who gave a memorable 80th birthday party for him in her home at Kensington Palace Gardens.

He moved from a Cambridge college reject in his youth to the Mastership of Christ’s; from a rejected author (of both a novel and his early research) to an acclaimed and prolific writer, editor and journalist; from a conventional  heterosexual youth in Leicester to an opportunistic bisexual life thereafter; from his life-enhancing and inspiring best to his embittered worst in extreme old age; from his infancy when he was wet-nursed by a friend of his mother’s to his funeral when he was buried without mourners or music or elegies or even a coffin. For all his achievements, his life also encompassed failure and disappointments and its end was almost unbearably sad.

This memoir is an attempt to do for Plumb what a relative of Lord Macaulay once did for that great historian, when he wrote: “There must be tens of thousands whose interest in history and literature he has awakened and informed by his pen, and who would gladly know what manner of man it was that has done them so great a service”. The “manner of man” that emerges from this book is as fascinating as it is surprising.

Neil McKendrick is one of the best known historians in 18th century studies.  He graduated with a ‘starred’ First in History at Cambridge in 1956. He was elected into a Research Fellowship at Christ’s College in March 1958 and elected as Fellow, College Lecturer and Director of Studies in History at Gonville & Caius College in October 1958. He was appointed Chairman of the History Faculty in 1985 and Master of Caius in 1996. His classic work (with John Brewer and J.H.Plumb) is The Birth of a Consumer Society: the Commercialization of Eighteenth-Century England, newly available from EER in a second expanded edition.

His other publications include Historical Perspectives: Studies in English Thought and Society (1974), , The Birth of Foreign & Colonial: the World’s First Investment Trust (1993), and F & C: a History of Foreign & Colonial Investment Trust (1999). He was general editor of the Europa Library of Business Biography and the Europa History of Human Experience. He is noted for his work on Josiah Wedgwood and the Industrial Revolution. He is currently a Life Fellow and former Master of Caius College and an Honorary Fellow of Christ’s College.

"It is a devastatingly honest memoir which required courage and a love of truth...an invaluable source both on historical scholarship and on that golden period between 1946 and the 1990s when English universities exercised cultural leadership and commanded political and popular respect for their expertise." - Richard Davenport-Hines, The Times Literary Supplement.

"A riveting read with its unique insights into a powerful, complex and difficult character, Jack Plumb, an outsider who in the second half of the twentieth century brilliantly combined the worlds of academic and popular history, New York high society and the British establishment, but who never felt he received his due." - Professor John Brewer.

​"It is very good - an unstoppable read". - Professor Norman Stone.

"I read your memoir of Jack at a single sitting. I couldn't put it down: what a wonderful pen portrait you provide of a man who had such an immense impact on both of us. Thank you for bringing Jack back to life like this." - Professor Geoffrey Parker.