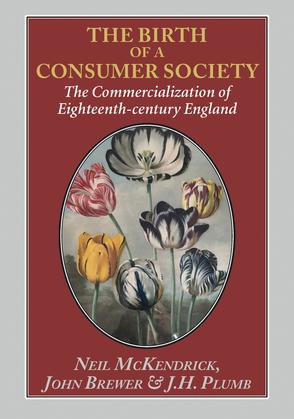 This enormously influential book by three leading historians was a revolution in the understanding of commercialisation and the economy, entrepreneurship, innovation, and the consumer revolution.
Neil McKendrick studies the fashion and the pottery industries, and created a new framework for enquiring into fundamental issues. John Brewer examines the commercialisation and politics. J.H. Plumb considers the social; changes brought about by commercialization, looking in particular at leisure, the ‘new world’ of children, and the acceptance of modernity.

Neil McKendrick is one of the best known historians in 18th century studies.  He graduated with a ‘starred’ First in History at Cambridge in 1956. He was elected into a Research Fellowship at Christ’s College in March 1958 and elected as Fellow, College Lecturer and Director of Studies in History at Gonville & Caius College in October 1958. He was appointed Chairman of the History Faculty in 1985 and Master of Caius in 1996.

He is the author of Sir John Plumb. The Hidden Life of a Great Historian. A Personal Memoir, to be published by EER in September 2019.

His classic work (with John Brewer and J.H.Plumb) is The Birth of a Consumer Society: the Commercialization of Eighteenth-Century England, newly available from EER in a second expanded edition. His other publications include Historical Perspectives: Studies in English Thought and Society (1974), The Birth of Foreign & Colonial: the World’s First Investment Trust (1993), and F & C: a History of Foreign & Colonial Investment Trust (1999). He was general editor of the Europa Library of Business Biography and the Europa History of Human Experience. He is noted for his work on Josiah Wedgwood and the Industrial Revolution. He is currently a Life Fellow and former Master of Caius College and an Honorary Fellow of Christ’s College.

John Brewer graduated with a ‘starred First’ in History at Cambridge in
1968. He was elected into a Research Fellowship at Sidney Sussex College
in 1969 and then into a Fellowship at Corpus Christi and his first University
post in Cambridge. He has held many professorships including chairs at
Washington University in St Louis, Yale and Harvard. In 1987 he left Harvard
to become the Director of the Clark Library and the Center for Seventeenth
and Eighteenth Century Studies at UCLA. He became
Professor of Cultural History at the European University Institute and in 1999
he returned to the United States as Professor in English and History at the
University of Chicago, but moved to the California Institute of Technology
in 2002 where he held the Eli and Edye Broad Professorship in Humanities
and Social Science.

J. H. Plumb is globally the best known historian of the 18th-century, and the author of many significant books.

He graduated with the first ‘First’ in History achieved as an external London degree from University College Leicester in 1933. He was elected into a Research Fellowship at King’s College, Cambridge in 1939, and then into a Fellowship at Christ’s College in 1946. He was successively Lecturer, Reader and Professor at Cambridge. He was elected Master of Christ’s in 1978 and was knighted on his retirement in 1982. He held five American professorships and was awarded seven Honorary Degrees (five of them in the States). He published England in the Eighteenth Century (1950), Chatham (1953), The First Four Georges (1956), Sir Robert Walpole, vol. i (1956) and vol. ii (1960), Men and Places (1962), The Growth of Political Stability in England, 1675–1725 (1967), The Death of the Past (1969), In The Light of History (1972), Royal Heritage (1977), Georgian Delights (1980) and many other works.  A classic work (with Neil McKendrick and John Brewer) is The Birth of a Consumer Society: the Commercialization of Eighteenth-Century England, newly available from EER in a second expanded edition. Sir John died in 2001 aged ninety.

"a book as lively, as diverse and as rich as the society it describes" - Professor Linda Colley, Yale University, in London Review of Books.

“As Neil McKendrick, John Brewer and J.H.Plumb make clear in this important and engrossing book, contemporary observers were witnesses to the birth of what they call a consumer revolution. And it was to have a profound effect on English society and politics as well as on its economy. One of the main purposes of The Birth of a Consumer Society is to map out the territory and to determine the nature and scope of this new consumer market. It is not an easy task, and the authors’ sorties into the field are exploratory, suggestive and invariably carried out with great skill and sophistication. Neil McKendrick’s and Sir John Plumb’s work in this field is classic scholarship, well known to historians, but it is still good to have it collected and developed here. ” - Nicholas Phillipson, Sunday Telegraph.​

“A pioneering work. All three contributors are so good that one wishes each were longer, and making that comment on such an academic work as this shows how good it is.” - F. E. Pardow, Birmingham Post​.

“ This exhilarating view of a peasant society being transformed into a booming market economy should be pondered by orthodox historians. But even more by anybody interested in how poor countries can become rich ones.” - The Economist.

“Who staged the first “consumer revolution”? The English, during the 18th century, argues this authorial trio. This would hardly have been news to contemporaries such as Adam Smith and Napoleon, who knew a nation of shopkeepers when they saw one, but it is good to be reminded of it, especially when it is done with such panache, penetrations and fizzy detail.”  - Roy Porter,  New Society.

“ In The Birth of a Consumer Society: The Commercialization of Eighteenth-Century England by Neil McKendrick, John Brewer and J. H. Plumb we see something new. It contains work in progress that will eventually reshape our view of the century. It is vigorously written, highly interesting, and a world away from the political controversies studied (some would say not studied) by Sir Lewis Namier. We receive a tradesman’s eye view of history. England is not an aristocratic banana republic existing for the titled few, the view of Namier and E. P.Thompson. On the contrary it is a seething market economy.” - John Vincent, The Sunday Times.​

"a book as lively, as diverse and as rich as the society it describes" - Professor Linda Colley, Yale University, in London Review of Books.

The Birth of a Consumer Society

The Commercialization of Eighteenth-century England