​This acclaimed book recovers and explores an important tradition of 19th-century women’s poetry - from Felicia Hemans to Charlotte Mew. Angela Leighton not only discusses the work of many neglected poets (including Augusta Webster and ‘Michael Field’), she also charts the development of women’s poetry form the sentimentalism of Hemans and L.E.L. (Letitia Elizabeth Landon)) to the various strategies of self-displacement employed by the best of the Victorians, especially Elizabeth Browning and Christina Rossetti.

The work combines biographical material with theoretical readings of the poems, and offers new reinterpretations of some original and intriguing literature. Much of this had been by-passed or forgotten before Angela Leighton’s work.

​
It is impressive in scope, is highly original in its aims, and is established as the chief critical work in its field.

​Angela Leighton is Senior Research Fellow at Trinity College, Cambridge.  She was previously Professor of English at the University of Hull.  She has worked mainly on nineteenth and twentieth-century literature, on women's writing, on aestheticism and the aesthetic, and on poetry generally. She has published many articles and various critical books, as well as three volumes of poetry.

​“This is a thoughtful, often brilliant book. It is no less than the rediscovery and re-reading of forgotten women poets which involves the substantial critical and conceptual reappraisal both of our critical practice and of women’s writing in the nineteenth century.” – Isobel Armstrong.

'It is rare to read a work which tells us so much not only from
without but also from within each writer. The analyses in the book are both
highly informative and unusually close-grained. It is itself pleasurable to
read, and the writer shows an almost Ruskinian skill in evoking another art
object. Leighton's generous work above all produces a scintillating and
unsentimental account of difficulty, and of poems made across the grain.' 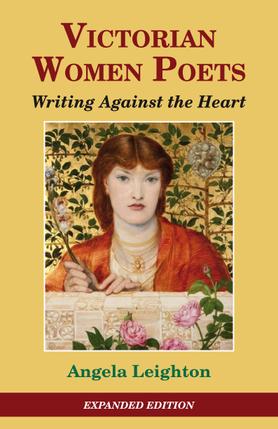 Studies in Literature and Culture series no. 2