In The Mind and Method of the Historian Le Roy Ladurie emphasizes social rather than political or diplomatic themes. This work has been at the core of the Annales school of historians, whose voices have reached every aspect of every kind of historical work.

Le Roy Ladurie here has followed Lucien Febvre and Marc Bloch, who broke radically with traditional historiography by insisting on the importance of taking all levels of society into consideration and emphasizing the collective nature of mentalities. It is mental frameworks that he urges as the basis which has shaped decisions and practices – and he explores these in diverse studies here.

Le Roy Ladurie stands with Fernand Braudel, Marc Bloch, Lucien Febvre and Georges Duby among the greatest of modern historians who pioneered changes in historical studies, world-wide. They form the great names of the Annales School in their stress on long-term social history. The school has been highly influential in setting the agenda for historiography – most notably with especially regarding the use of social scientific methods by historians. Braudel was editor of Annales from 1956-1968. His informal successor as head of the school was Le Roy Ladurie.

Emmanuel  Le Roy Ladurie is a French historian whose work is mainly focused upon Languedoc in the Ancien Régime, particularly the history of the peasantry. His landmark book Montaillou - which was published in 1975 to wide acclaim - had a huge impact on historical studies and remains a classic.

​“There cannot be much serious doubt that in the last twenty years Emmanuel Le Roy Ladurie has been one of the most - if not the most – original, versatile, and imaginative historians in the world…he has acquired an almost unique capacity to capture the imagination of a mass audience, while still retaining the respect and admiration of his professional colleagues.” – LAWRENCE STONE, New York Review of Books.

​
“In addition to being a gifted storyteller, Ladurie is a committed student of the 100-odd places historians must go to piece together the stories of the unwashed and unnoticed, of the techniques to weave incomplete and various kinds of evidence into the cloth of history…The essays share an interest in discovering what life itself, and not just the ‘events’ of life, was like in the past; how people lived, loved, took sick or didn’t take sick – what they ate, who they listened to, the weather, the crops, status and the long-term trends of such things that give us a picture of aggregate life.” – ROBERT DAWIDOFF, Los Angeles Times.

“…makes for provocative and interesting reading even for those who might consider themselves devotees of an older style of history…Ladurie is one of those unusual scholars who, even as he fulfils the typical expectation of his calling, is also transforming it with his own vision of what it might be.” – STANLEY J. IDZERDA, Review of Politics.

Classics in Social and Economic History series, no. 20.

The Mind and Method of the Historian

Translated from the French by Ben and Siân Reynolds. 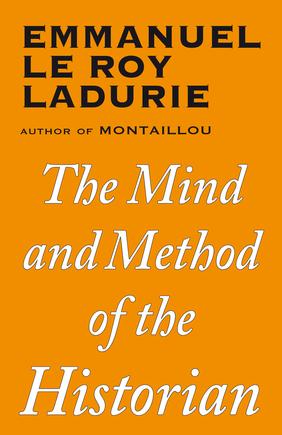