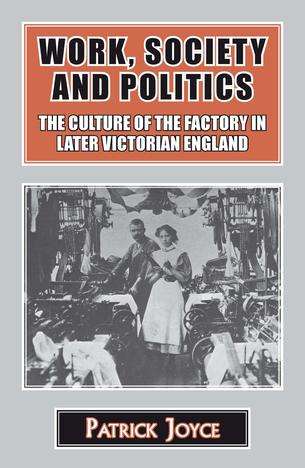 The acclaimed major interpretation of 19th century society and politics concerning the human impact of the industrial revolution.

Offers a subtle and responsive understanding of the formation of class consciousness, and a recognition that deference and stability as well as independence in class relations grew out of working-class culture and community , and thus out of the centre of people’s lives.

With a new Preface by the author.

“It is a remarkable and original first book, outstanding in its subtlety of perception, its documentary range and its many-sidedness of approach. - Times Literary Supplement.

“A major work of synthesis and interpretation, based on extensive research in industrial Lancashire and in the West Riding in the second half of the nineteenth century. It is a superb example of the new social history. -  Journal of Modern History.

“His results challenge many old and new orthodoxies… The freshness of insight on almost every page is both daunting and invigorating.” - Times Educational Supplement

The Culture of the Factory in Later Victorian England.

​ "It is a superb example of the new social  history."