A study of the literature produced for the working classes in early Victorian urban England.

Classics in Social and Economic History, no.19.

Literature for the masses appeared on an unprecedented scale in the first half of the 19th-century. This was the earliest response to new and voracious demands for cheap books of all kinds. This famous and innovative book enquires as to the nature of this new material, the responses to it, and its audiences amidst the new reading public which it illuminates

The technological advances in printing, and the urbanisation of the population were key influences. So, too, were new entrepreneurial energies amongst author and publishers.

Professor James shows what were the realities and the resonances of this new culture. He examines the effects of a new urban culture, its complicated class relations, the difficult history of the radical press, and the relationships between popular fiction and ‘literature’. His is a detailed and engaging, well illustrated study of the growth of literacy and the vivacious and enormously varied popular literature of both entertainment, improvement, and instruction which was published. This included chapbooks and broadsheets, plagiarisms of Dickens in penny serial numbers, gothic tales of terror, ‘blood-and-murder’, ’ghost-and-goblin’ fiction, exuberant historical novels, domestic stories, romances, and tales of fashionable life.

The first edition was welcomed by Raymond Williams, who wrote that ”Dr. James has done so thorough a job that all students of the period will be permanently in his debt….the success of the enquiry, in research terms is outstanding: a solid contribution to the necessary rewriting of nineteenth-century cultural history.”

The author has also added a short epilogue on other work in the field by radical historians, including E.P. Thompson, Ian Haywood, and Rohan McWilliam.

On working-class readership (by David Vincent); on serial fiction and popular traditions, journalism, melodrama and the visual arts ; and on recent studies of Edward Lloyd, J.M. Rymer, G.W.M. Reynolds; reprinted fiction by Valancourt et al. He has added a guide to relevant websites for ongoing study.

​Louis James is Emeritus Professor of Victorian and Modern Literature at the University of Kent, Canterbury. He began his academic career in the University of Hull adult education Department, followed by a lectureship at the University of the West Indies, Jamaica. In 1966 he left to join the newly established University of Kent at Canterbury, from where he took years out to teach at Universities in the United States, Africa and the Far East.  His publications on Victorian and postcolonial literatures include Fiction for the Working Man (1963); The Islands in Between (1968); Print and the People (1976); Jean Rhys (1978); Caribbean Writing in English (1999), and The Victorian Novel (2006). More recently he edited, with Anne Humphreys, G.W.M. Reynolds. Nineteenth-Century Fiction, Politics and the Press (2008).

”Dr. James has done so thorough a job that all students of the period will be permanently in his debt….the success of the enquiry, in research terms is outstanding: a solid contribution to the necessary rewriting of nineteenth-century cultural history.” – Raymond Williams.

"A marvellous study of the wealth of printed fiction in various forms available to the working-class reader in the period 1830-50." - Professor Simon Eliot, in The Nineteenth-century Novel.

“He has mapped a huge jungle.” Geoffrey Tillotson, The Spectator.

“This book is a well-documented and scrupulous attempt to reconstruct the tastes and preferences of the urban English working class, in a period when they are almost hidden from sight.” – John Wain, The Observer.

“The vividness of his subject, its social ramifications, and the masterly mental vigour he has brought to it, make it a most readable book.” – The Times.

“There can be few sorts of research where the field material by itself is more fascinating…The most thorough study yet of the literature produced for the working classes in early Victorian urban England.” – David Holloway, Daily Telegraph.

“This book is more exhaustive and scholarly than any foregoing account and it is impossible to praise too highly Dr. James’s scrupulous chronological approach to his unwieldy material…His whole approach to this Victorian field is one of the most praiseworthy thoroughness, underlined by all the auxiliary excellences of the book – the revealing wood-cuts, the appendix on working-class poets, the check list of publishers and penny-issue novels, and the very full bibliography.” Patricia Thomson, Review of English Studies.

“All his study is interesting, but the seamy side is the most engaging.” – Nigel Dennis, Sunday Telegraph. 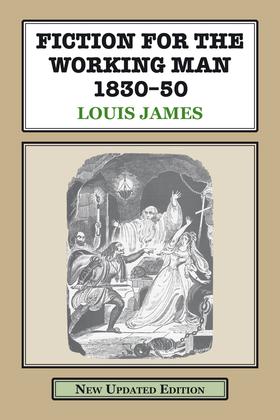