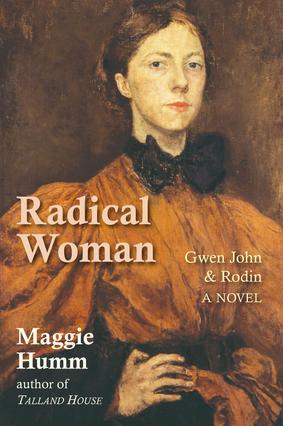 Finalist in the Page Turner Awards 2022

This major new novel by the best-selling Maggie Humm is the story of artist Gwen John’s tumultuous affair with the French sculptor Auguste Rodin.

This historical romance literary fiction is told in the first-person present tense. It explores Gwen’s journey from a naïve young woman to a self-confident and celebrated artist. Both Rodin and Gwen John were radical artists who challenged the conventions of art and respectability in the early years of the twentieth century. Here Gwen steps out from the shadows cast first by her brother Augustus John the painter, and then by Rodin, to play her part in the furthering the cause of female artists to be treated as equals by their male counterparts.

The novel is largely set in London and Paris between 1897 and 1917, and focusses on pivotal moments which transform Gwen’s life.

As a Slade student in London in 1897, she mixes in an artistic coterie, drinking together in Fitzrovia, dining at the Café Royal, and learning from all the famous artists of the time, which sustains and encourages Gwen in her chosen career.

Living in Paris in 1904-1917 she moves in the exciting Parisian art world and its cafes, studios, and complex heterosexual and Sapphic relationships. Gwen enjoys her life as an independent woman living alone, with her painting supported by modelling for income. One day, while modelling, Gwen meets Rodin. Having once glimpsed him, to her excitement, in the British Museum, she is delighted to be invited to model for Rodin and they begin a sexual relationship. Their affair, despite his other lovers, is passionate and for Gwen life changing. The ups and downs of their relationship produce scenes of tense confrontation and equally intense love. Gwen adjusts to her life as a cinq-à-sept mistress.

Her obsessive love for Rodin, and his increasingly casual treatment of her, threatens to stultify her painting but Gwen is continually inventive. One day Rodin visits, telling her that only she, the sole artist among his other models, can fully understand him and his art. The surprising moment transforms Gwen’s understandings about herself, and her art and that dramatic insight fully releases her into a vocation, supported by recognition of her work by a major American collector John Quinn and by the New English Art Club.

A brief afterword ‘What happened next’ completes the lives of Gwen and other real-life characters after 1917 and reveals which characters are fictional.

Maggie Humm’s novel Talland House was shortlisted for the Impress Prize, Fresher Fiction Prize (as Who Killed Mrs. Ramsay?) Retreat West Prize and Eyelands Prize and longlisted by the Historical Writers Association. Talland House was one of the Washington Independent Review of Books ‘51 Favorite Books of 2020′. 2021 Next Generation Indie Book Awards Finalist in Historical Fiction (post 1900s). 2021 Eric Hoffer Award Grand Prize Short List. She is also the author of Border Traffic, The Dictionary of Feminist Theory (the first edition of which was named ‘outstanding academic book of 1990’ by Choice), the best-selling Modern Feminisms, Feminism and Film; Modernist Women and Visual Cultures: Virginia Woolf, Vanessa Bell, Photography and Cinema; Snapshots of Bloomsbury: the Private Lives of Virginia Woolf and Vanessa Bell, and editor of The Edinburgh Companion to Virginia Woolf and the Arts.

"A vividly imagined and deeply researched portrait of one of the 20th century’s greatest artists.   Gwen John springs from the page in all her brilliance and complexity."

- Annabel Abbs prize winning novelist of The Joyce Girl, Frieda, and The Language of Food.

"In Radical Woman: Gwen John & Rodin, Maggie Humm embodies Gwen John, bringing her to the centre of a novel that explores the emergence of this Welsh artist from the Slade in London into the vibrant Parisian art world of the early 20th century. Humm’s great achievement in this novel is to enable John to emerge from the shadows that she was often cast beneath and to shine a light on her lived experience as a woman and a painter working in Paris with intensity and passion.

John was frequently frustrated by her experiences as a woman in a patriarchal world, struggling to be taken seriously as both an independent woman and a painter. Through her novel, Humm has sought to sensitively evoke this quiet voice so that we may hear it in all its dimensions.

Reflecting on one of the key relationships of Gwen John’s life, Humm journeys into the passionate affair between John and Rodin."

- Anna Falcini, artist and Director of Chère Julie, a film about the poetic traces of Gwen John’s life.

"Maggie Humm’s novel, Radical Woman: Gwen John & Rodin, is a marvellous portrait of a singular artist who, even as she fell under the dominant spell of the French master, was stubbornly refining her own vision more or less in his shadow.

The author gives us the creative ferment around Bloomsbury and the Slade at the turn of the twentieth century, in which Gwen developed her craft in the fruitfully competitive hotbed of student life. We travel with her across France, open to experience and adventure. We see her growing obsession with and attachment to Rodin in Paris. She longed to be more than one of his mistresses, yet her relative solitude, in sparsely furnished rooms, left her free to paint the wonderful portraits and self-portraits that posterity has found to be among the defining images of that period.

Written in the form of a fictional autobiography, Gwen negotiates the conflicting challenges of other people’s demands with her own anxieties, of sex, money, artistic integrity. This novel gives us a deep, authentic portrayal of a female artist in her time."
- Prize-winning novelist Tim Pears, FRSL, author of In the Place of Fallen Leaves and the West Country Trilogy.