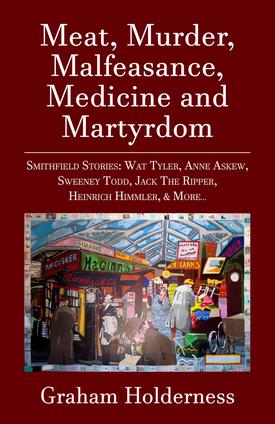 Nominee for THE SPECTATOR Book of the Year

​This remarkable book reveals the sensational, historical and personal stories of the physical, cultural and psychological territory of London’s Smithfield.

In an extraordinary area, measuring little more than a square mile - bounded by Farringdon Street, Charterhouse Street, Aldersgate and Ludgate - can be found in microcosm some of the key contours of British national life. Here, to borrow the name of a famous Smithfield street, in something like its entirety, is ‘Little Britain’.

Originally a ‘smooth field’ outside the City walls, used for grazing animals, Smithfield was, from time out of mind, the site of the famous livestock market until it was moved to Islington in 1855. It thus became a place for the slaughter of animals, and for the dead meat market that still survives.

Violence against animals was extended to violence against humans. The site of animal slaughter became one of the premier arenas of public execution, for treason or heresy. Since many were judicially killed for religious rather than criminal reasons, some of their deaths may be considered martyrdom, rather than execution. The area is rich in ancient institutions of law and punishment. Newgate Prison was built nearby in 1188, and the central criminal court, better known as the Old Bailey, erected there in the 16th century. Newgate has gone, but the Bailey remains.

Between these instruments of justice, and the stench and violence of market and abattoir, stand institutions of healing and salvation: St Bartholomew’s Hospital, and the Church of St Bartholomew the Great, both founded in the 12th century. And close by is St Paul’s Cathedral, which may have roots extending as far back as the 7th century. Clerkenwell priory, the huge London base of the Knights Hospitaller, stood alongside Smithfield, entered through the still surviving Gate of St John.

These monuments of national life are not discrete but interactive. In Smithfield medicine, faith, justice, punishment and animal slaughter all share common ground.

Graham Holderness tells the stories of Wat Tyler, Aaron Kominski [‘Jack the Ripper’], Heinrich Himmler and others as rooted in the ground of Smithfield. They revolve around the institutions it houses, and dwell on the overlapping activities that have characterised it for centuries. They range across historical fiction, ‘Restoration comedy’, Gothic romance, drama, ‘alternative history’, and contemporary realism. Most are closely tied to the real past by the use of historical sources and documented events: the execution of William Wallace, the killing of Wat Tyler, the burning of Anne Askew, the execution of Amelia Dyer. Others explore the imaginative possibilities of Smithfield, rather than its authenticated events and characters, reanimating fictional characters such as Sweeney Todd, or the hero of Hogarth’s Four Stages of Cruelty; or inventing a modern Halal butcher who is radicalised and joins Isis.

These stories trace in every example the interactions of meat, murder, malfeasance, medicine and martyrdom. They are concerned with the commonalities of violence exhibited in the slaughtering of beasts, the torture and execution of criminals, the violations of the body practised on the autopsy table and in the research laboratory, the atrocities of murder and cannibalism.

These stories construct an impression of Smithfield, ‘Little Britain’, and throw their dark light both on British national history, and on the human condition.

Graham Holderness is a writer and critic who has published, as author or editor, more than sixty books, many on Shakespeare, and hundreds of chapters and articles of criticism, theory and theology. His more recent work has pioneered methods of critical-creative writing, exemplified by Nine Lives of William Shakespeare (Bloomsbury/Arden Shakespeare, 2011); Tales from Shakespeare: Creative Collisions (Cambridge University Press, 2014); and Re-writing Jesus: Christ in 20th Century Fiction and Film (Bloomsbury, 2014): Samurai Shakespeare​ (EER, 2021).  He has published several works of fiction: The Prince of Denmark (University of Hertfordshire Press, 2001; EER, 2021); Ecce Homo (Bloomsbury, 2014); Black and Deep Desires: William Shakespeare Vampire Hunter (Top Hat Books, 2014). His new novel, ANCESTORS: Adventures in a Foreign Country​ will be published by Edward Everett Root in 2022.

“The project is an eclectic mixture of history and fantasy, written with Dickensian flair and a great passion for place and detail. Through research and literary curiosity Holderness turns Smithfield Market into a Pandora’s box of possibilities and imbues the reader with a sense of place and historical depth. The final story explores the contemporary face of Smithfield, London and international terrorism through a finely contracted cautionary tale that leaves the blood cold”.
- Sulayman Al-Bassam, author of The Arab Shakespeare Trilogy (Bloomsbury, 2014).

“A market in death - a killing field for man and beast - Smithfield was where blood, power and resistance met.  Holderness evokes this place and all its contradictions in powerful prose, bringing to life Londoners both real and imagined”. - Tim Hitchcock, Professor of History, University of Sussex, co-author of London Lives: Poverty, Crime and the Making of a Modern City, 1690-1800 (CUP, 2015) and Co-Director of the Old Bailey Online.