Studies in Literature and Culture series, no.6.

The Eighteen Nineties
A Review of Art and Ideas at the Close of the Nineteenth Century.

New illustrated edition with an introduction by Christophe Campos.

This remains the classic and sparkling survey of the great awakening of culture in the 1890s. Indeed, it is a book almost as well-known as many of the works of art, literature and people it describes and evaluates.

It is quite unambiguously the standard work on the raffish, scandalous, tempestuous ‘yellow nineties’ of Wilde, Beardsley, Beerbohm and the rest.

This edition has 8 illustrations added to the original text. Holbrook Jackson, himself an exceptional stylist, reviews the awakening of the 1890s, the realisation of many new possibilities, and the intent to live life more fully and intensely. He interprets the decade in terms of personalities and argues that the period has a distinct character, in tracing the lines of development among major continental and British figures.

(George) Holbrook Jackson (1874 – 1948) was a literary critic, manager of trade journals and a noted bibliophile and collector. He helped to found the political and literary periodical New Age in 1907, winning support from Bernard Shaw. Publications include Bernard Shaw (1907); The Eighteen Nineties (1913); Anatomy of Bibliomania (1931); Bookman’s Holiday (1945); On Art and Socialism (1947). 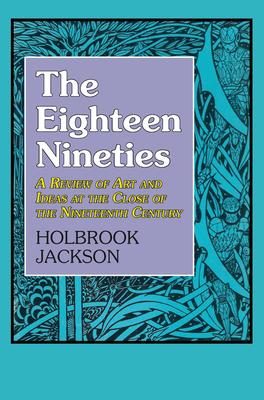