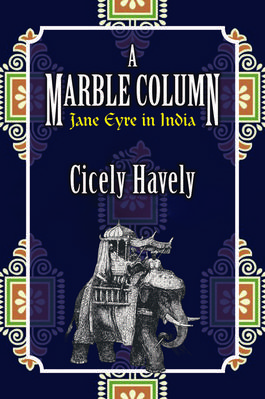 Advance acclaim: "One of the great rewards of reading this novel is the complexity of the characters’ psychological responses. This is not only a literate, intelligent, well-informed novel – it is also a ‘good read’, full of lively detail, a vibrant atmosphere and surprising twists to its story. I read it with great pleasure." - Patsy Stoneman, author of Brontë Transformations, &c.

A Marble Column is a sequel to one of the most famous novels in literature.

Set against a rich background in which the patterns of imperial rule in India are not yet fully hardened, this lively and far-reaching work is a further voyage of inner discovery which puts great loves to the test.

Charlotte Brontë gives the last words of Jane Eyre to the uncertain destiny of St. John Rivers, the ardent missionary Jane rejected for Mr. Rochester. So what happened to St. John in India? A Marble Column develops the characters and themes of Brontë’s original novel.

An epidemic threatens to drive Jane and Rochester apart. Desperate to flee from her grief, Jane determines to uncover the fate of St John Rivers, the ardent missionary she rejected. Impatient for her recovery, Rochester reluctantly agrees to accompany his wife to India. As they make their journey, St John’s story unfolds. At odds with his Church and bewildered by India, he has retreated to the southern hills and established a modest school and farm. There he might be contented, if he were not tormented by love for Jaya, one of his few converts

Following clues in Charlotte Bronte’s original novel, A Marble Column is set in the years before imperial attitudes fully hardened. Preoccupied with their own desires and benevolent intentions, the English characters are so steeped in the habits of their kind that they can no more see the consequences of their actions than the near-blind Rochester.

Cicely Havely was born in Yorkshire. After completing degrees in English at Oxford, she joined the Open University, where her writing and broadcasts ranged from the medieval to the post-colonial. She has also lived in the USA, and for over 30 years has travelled extensively in India and Southeast Asia.