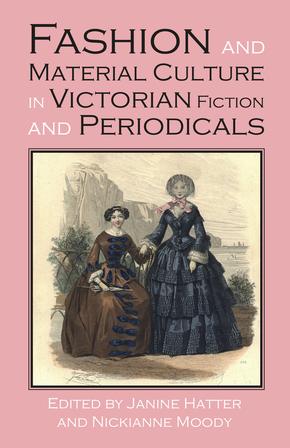 Fashion and Material Culture in Victorian

Fiction and Periodicals
New Paths in Victorian Literature and Culture series, No.1

This attractively illustrated new collaborative work examines dress, style and performance as a significant pleasure of fiction. It illuminates many significant factors of Victorian life.

The book examines the ways in which Victorian writers, illustrators, periodicals, designers and clothing manufacturers have critiqued the social ideologies inherent in dress, fashion and imaginative engagement with clothes.

This is the first volume in the New Paths in Victorian Popular Fiction and Culture series being published by EER. The series comprises specially commissioned work based on innovative or under-researched perspectives on Victorian literature and culture.

As an aesthetic medium, fashion expresses a person’s life course, their ideas, desires and beliefs, and fiction itself is a site where these issues can be resolved.

Not only were fictional characters made recognisable through their dress, but readers of serial fiction encountered them in between adverts, cartoons, print and patterns. Thus, how dress is depicted in fiction responds to its material paratext.

Victorian dress and literature equally licensed or discouraged particular forms of clothing, fantasies and moralities about men and women, as well as distinctions between generations. As a result, this volume’s multidisciplinary approach engages with theoretical perspectives on dress history, periodical publications, archives and dress.

The book is shaped in four distinct sections. Writers engage with fashion and material culture using an interdisciplinary methodology, as well as through fashion’s multiple performances as depicted in text, image and design.

Part 3, ‘Conduct and Clothing’, considers novelistic depictions of fashion with regard to scientific, racial and gender identities. These are cross-related to reader consumption and behaviour.

Part 4, ‘Consumption and Fashionable Performance’, examines periodicals, genres and drama as performative in their own right.

2. Artistic Engagement with Fashion’s Material Culture. a. Elaine Andrews: ‘The Puzzle of our Heroine’s Character’: Fashionable Beauty and Interiority in the Late Juvenilia of Charlotte Brontë. b. Carolyn Ferguson: A Weave of Words: Fabric, Print and Pattern in the Mid-Nineteenth-Century Novel. c. Kara Tennant: ‘Buying in Style’ Sartorial Sensibilities and Victorian Popular Fiction.

4. Consumption and Fashionable Performance. a. .Janine Hatter: Fashioning Fiction: The Consumption of Mary Braddon’s Belgravia: A London Magazine.  b. A Luxx. Mishou: ‘It was impossible that such a creature could be feminine’: Fashioning Villainy and the Language of the Grotesque in Gothic Fiction. c. Madeleine Seys: ‘Muslins, Confidences and Illicit Conversations’: Fashioning Transgressive Femininities in George Moore’s A Drama in Muslin (1886).

"It illuminates many significant factors of Victorian life". - Andrew Chapman, The Genealogist.

New Paths in Victorian Literature and Culture series, No.1