This work studies the interactions of three phenomena of 19th-century British politics: the electoral system (developing under the impact of frequent electoral reform), key pressure groups including the Anti-Corn Law League, the Liberation Society, the National Education League, and the United Kingdom Alliance; and the impact on the governing Liberal Party.

It also offers important analysis of the work of Richard Cobden, ‘the Apostle of Free Trade.’ The work in particular analyses the employment by pressure groups of the mobilisation of electoral pressure to persuade candidates and political parties to commit to specific legislative changes

“…strategic studies do much more than merely illustrate the strategists' concerns. They also throw light upon the loyalty and discipline of the forces under their control and the general environment of the action. Such is the case with Hamer's new book…The Politics of Electoral Pressure is a valuable book…. ” - Professor D. C. Moore, Journal of Modern History.

“Its investigation of hundreds of different electoral interventions is a substantial, if necessarily somewhat repetitious, historical addition to the literature provided by political scientists.” -  Professor J.R. Vincent.

Classics in Social and Economic History series, no.8. 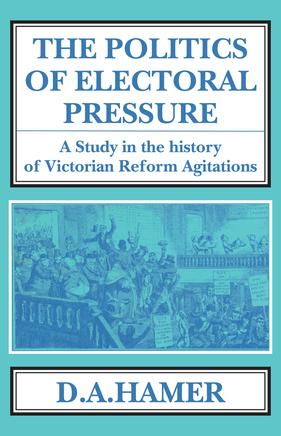 The Politics of Electoral Pressure
A Study in the History of Victorian Reform Agitation.